I had this weekend dialed in before it even started: Swap out the studs for slicks on my commuter; swing by the annual bike swap to check out the goods and run into some frien 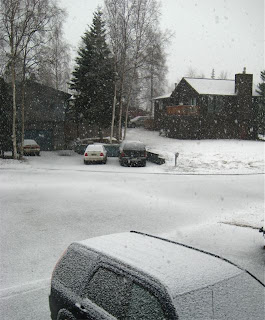 ds; do a ride up to Midtown this afternoon; and then get the road bike ready for a ride on Sunday.

Those plans were hosed before breakfast. At 8 a.m. it was snowing so hard that when the wind swirled through my cul-de-sac, I could barely see my neighbors’ house across the street.

Later, I drove through the slop to get some cash for the bike swap. The ATM was out of service. I drove to the grocery store and bought a doughnut so I’d have an excuse to use my debit card and get cash back. Finally, I made it to the bike swap ... a week early.

The damn thing is next Saturday.

The weather guys say we could have 11 inches of snow by tomorrow.

Time unpack the and dust off the fat tire bike. It's winter again. Wann go ride the hillside tomorrow? I too was planning on riding on skinny tires tomorrow, but that's probably going to have to wait another week. What's the noise? Holey Crap! The neighbor just brought out his snowblower. I think I'm going to puke!

Lol...you grumpy old men. I rode my Trucker over to the beer store and stopped by Barnes & Noble to pick up a better map of AK.

I have one ride of the summer almost planned. Anchorage to DNP via Glenallen and the Denali Hwy.

I'm going to meet the family and in-laws up at DNP and then go visit FBX and Silver Gulch Brewery. I'd love to ride all the way back but I can't swing that much holiday from work.

Grumpy?? I reckon it could be Alzheimer's starting to sneak in there. Unfortunately I can't say anything cause I can't even remember where I put my keys half the time.

when, where and what time is the bike swap?? someone fill me in.
g.e.dube@ak.net plz let me know. bunch of other stuff going on in life right now, have been outta da loop for a while.

paramount just got in some sweet baskets for your rear rack for those groc runs. BASIL from the netherlands. follow the instrctns, set it up to the width of your rear rack and then it works like a quick release w/ a lock built into the qr lever. it has a padded handle so it can be taken into the store, filled and remounted to your rack! DAVE IT if your trucker has a rear rack this would be gr8. mine does and i got 1 of the 2 they had.

let me know on the meet!! geo.