On Wednesday evening, I grabbed my camera and headed down to Potter Valley Road to watch members of the bike club race up that beast. It's only 1.9 miles fro 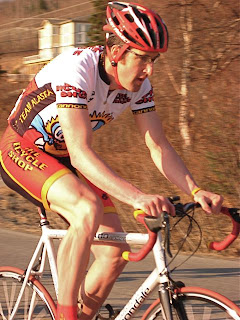 m top to bottom, but the road climbs 660 vertical feet over that distance.

I ride it often this time of year in an effort to lose winter flab and get back in shape, so I thought it might be fun to see what it looks like when fast riders climb. (In case you were wondering, it looks a lot better when they do it.)

There were all sorts of riders climbing at a variety of speeds, but the real contenders looked the part. They were lean, well-muscled, decked out in team kits and shaved legs, and riding beautiful bikes. But I didn't know until the next morning—when I read race coverage in the Daily News—that I left too early and missed my chance to shoot photos of the coolest and toughest rider on the hill: a 58-year-old woman who finished last.

Four years ago, Patty Ginsburg was trying to survive lung cancer. The treatments that saved her left a lot of damage, and doctors told the former marathon runner that her lungs would never been the same again. Now she rides to push herself, and to see how much she can do.

Wednesday night, she was pedaling the first road bike she has owned in 30 years, and beat her personal goal of 25 minutes when she finished in 23:19. She was dead last, and very much alive.

It's funny how we always think we're supposed to watch the rider at the front of a race.

It's a shame when we miss the best part because we don't know we should be watching the rider at the back.
Posted by Tim at 10:08 PM

Excellent post. We all ride at different speeds and for different reasons.