I often call mountain bikers the coolest people on the planet. In most cases, I’m right.

That’s why I hate to be reminded that even the people in our sport can behave like selfish assholes. 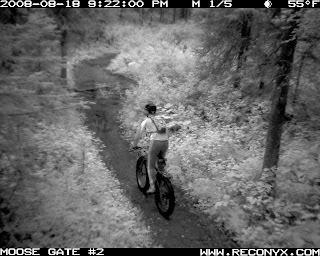 A few weeks ago, city officials declared Rover’s Run closed until further notice. Not everyone agreed with the decision, but it was a reasonable one under the circumstances. Two people had been mauled by bears on that trail, with the incidents occurring only a short distance and a few weeks apart. The bear, or bears, were still out there, feeding on salmon from the stream next to the trail.

Biologists set up cameras to capture images of bears using the trail so that they could identify individual animals and learn their habits. Unfortunately, they also got to see something else: bicyclists poaching the closed trail. 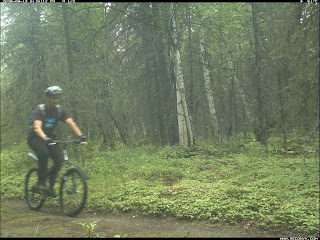 It was no accident. These riders chose to do this. The trail was clearly marked and the closure was widely publicized. It was also public knowledge that cameras had been installed. These guys didn't just thumb their noses at the closure, they did it when the whole city was watching, and soon after the mountain-biking community had endured public criticism because the first mauling occurred during a bike race.

One person was photographed riding the trail on more than one occasion during the closure. This is a guy who bragged about riding an off-limits trail a few months ago, then responded to criticism by promising to be more careful. He said he believed in efforts to improve the image of mountain bikers, and vowed he would help that cause.

Apparently, he didn’t mean a word of it. 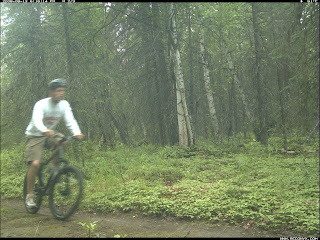 A lot of mountain bikers in Anchorage have worked hard in recent years to improve relations with land managers and other user groups. Symbolically, these trail poachers have taken a big, fat, steaming dump on those efforts. Because when the non-cycling public picks up the newspaper and reads that bike riders are ignoring the trail closure, they lump us all together.

When I think of mountain bikers and cool people, these guys don’t fit the bill.

As far as I’m concerned they aren’t even real mountain bikers. They aren’t worthy of the trails.
Posted by Tim at 6:15 PM

All it takes are a few selfish people to tarnish the image we've been building in this community.

Not only is the closure well-marked, it's barricaded! There are a couple alternative routes people can use, but this guy thumbing his nose at the closure is making us all look bad.

He should come clean and apologize to the community. Then, as you've suggested, he could trade his bike for a bowling ball, though keep in mind, it's not the bowlers' fault so why should they have to pay?

As I once said to myself after trying to discourage a young graduate of the marine sniper school from using a 30-30 Winchester for bear protection. "Well, somebody has to feed the bears." Morons

Amen! I really don't get people like this. Their actions hurt the entire community of bikers. I hope some of the offenders read your blog.