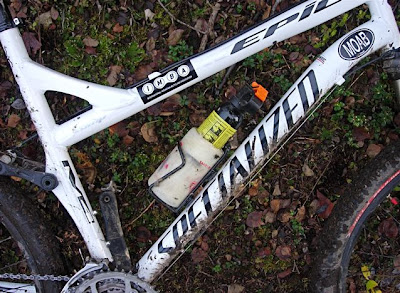 While riding over Resurrection Pass recently, I met a rider coming toward me with the barrel of a shotgun sticking out of his backpack. This was near the spot where, a few years ago, I saw a rider with his 12-gauge strapped in a BOB trailer … under all his other gear.

Bear protection is always a subject of debate in Alaska, but it has been on the minds of most people in Southcentral a little more than usual this summer. Unfortunately, there are a lot of people—men, usually—who believe guns are the only viable option. I believe they’re kidding themselves.

I may be fairly liberal, but I’m not an anti-gun liberal. I grew up shooting guns, and still enjoy firing a few rounds from time to time. I just think they’re useful in some situations, and nearly worthless in others—like when a 600-pound ball of teeth and fur is charging through heavy vegetation at 30 mph. Only the most skilled and proficient marksmen have a good chance of pulling off a deadly shot at a time like that. And by marksmen, I’m not talking about weekend warriors who go to a rifle range and shoot at a paper target a few times a year. I’m talking about SWAT and military types who are trained to perform in high-stress settings. Anyone else is just trying to get lucky.

I carried a gun on a few hikes after moving to Alaska, but I stopped years ago when I began to recognize that it was only marginally useful. Besides, it wouldn’t have been comfortable—or safe—to ride a mountain bike with a hand cannon strapped to my hip. I got rid of the thing and started carrying pepper spray.

This thinking goes against the macho standard that is so common in Alaska, but what the hell—I mean, I’m already out there in Lycra shorts, right? I just think it’s way easier to hit the broad side of a moving barn with a big cloud of pepper gas than with a little bullet, and the figures back me up.

Besides, when I’m pedaling up a mountain, I like the idea of a lightweight canister.

That guy hauling the 12-gauge across Resurrection Pass looked tired.
Posted by Tim at 8:30 PM

yeah, I've been thinking of carrying the pepper spray but I also have only one place for a bottle cage on my bike & I like having a water bottle.

I am contemplating it. A side-arm strapped to the garter would just freak people out. Hmm, not such a bad idea when commuting.

It doesn't seem all that effective to pack heat on a ride—especially when you only have a fraction of a second to assess the situation, get your weapon in position, aim, and fire.

You're bear fodder at "assess the situation."

And, yeah, why bother with being macho when you're wearing lycra?! That totally cracks me up.

I do see a small handgun useful when dealing with rednecks. Most are great, but I've run into a drunken group of them in the forest at night. It would have been nice if I could have had a bit more swagger than I did.

I loved the Lycra comment. When I first started commuting I felt like I was facing bears walking through the corporate lobby wearing lycra and tap shoes.

You're an idiot and I'd say a screaming lib!! You've probably handled as many guns as Hillary Clinton.

Your ability to write without the use of 4 letter words also shows you have a very small brain.

On the bright side, Anonymous, I have the balls to not write anonymously.

Oops. You probably count "balls" as a four-letter word, even though it has five letters. I guess that's my small brain at work again.

Thanks for stopping by, you little shit.

I carry a both a gun and bear spray. I figure if the spray does not work maybe I will be able to get to my 44 before I get eaten.
I ride solo 90% of the time,carrying a gun has nothing to do with macho.Its just extra peace of mind when I am out there by myself.

Define irony: "Your ability to write without the use of 4 letter words also shows you have a very small brain."

I believe the word you were looking for might have been "inability", no? Dumbass.

Most of the rangers out west in the park system swear by the bear spray over any other weapon.

Rangers, Fish and Game they’re all tree huggers in a state uniform. Rick Sinnot would rather stand by and watch innocent people get killed than to take down one bear. Our tax and spend mayor just had to do something to look like he cared. Of course I’m all for that bear dining on our foul mouthed blogger.

Anonymous, you're an arrogant little shit who doesn't even know how to spell "Sinnott" or use hyphens to properly construct modifiers.

and if your pump breaks...

you can use the pepper spray to fill your tire!

Anonymous says screaming lib (I assume he can't spell the full word) like it's a bad thing. On the bright side, Anonymous is more likely to get eaten as he rides down the trail with his head up his ass and doesn't see the bear coming...

Anonymous commenters and people in cars sure are tough, ain't they?

I had a recent interview in the paper, and in the online version I was called a "smug twit" for suggesting (gasp!) that people give bicycle commuting a shot. Apparently I hadn't considered the disabled people that would love to do this but can't. And of course all the "lib" stuff. That Anonymous guy really put me in my place!

Thanks for not deleting his/her comments. Very entertaining!