There are certain sounds you never want to hear on a bike: car horns and screeching tires coming up from behind; the hissing of air; growling dogs; and sudden, loud cracking sounds between your 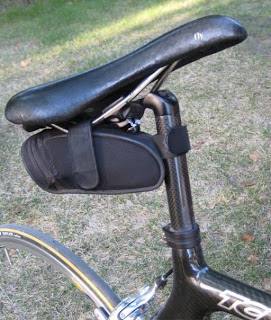 So I wasn’t a happy guy Tuesday night when a loud bang was immediately followed by the horn of my saddle slamming into my crotch and a sharp piece of seatpost scraping my inner thigh.

Neither is a pleasant sensation. Nor is pulling out the cell phone to call home and ask for a lift when you’re only 15 miles into a 35-mile ride that was feeling really good. I’ve busted a few seatpost bolts on mountain bikes over the years and have spent plenty of time pedaling home without a saddle, and it sucks—so I called for a rescue. Until now, though, I’d never managed to break a seatpost clamp, especially on a road bike.

And this one snapped like a dry stick. I mean, I know I’m a big guy but damn, I’m not that big. Thanks to Jon at Paramount for setting me up with a quick replacement, even though the roadie will be parked for the next few days anyway.

It’s time to break out the mountain bike and head north to kick off a new season with the Denali Classic. A long weekend of campfires, bikes and beer. The blog is always slow this time of year when all my time is spent on the road bike, but if things go well, I’ll be back next week with some new stories and a big batch of photos.

Summer is at hand, folks. Let’s set the knobbies free.
Posted by Tim at 9:41 PM

Ouch! So now that you are singing soprano...

For the record, this time I really am using self restraint.......

Check with John Deere. They make seats for big boys.