Buying a road bike was one of the greatest things I could ever do for my springtime sanity. I no longer spend six weeks being irritable between the end of winter riding and the end of the spring 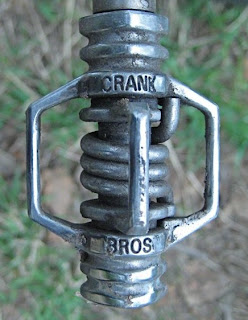 trail-drying cycle. But there’s a downside to this seasonal distraction: All that time on the road means less time in the garage getting the full-suspension rig ready for summer.

My Epic’s pedals need a rebuild, and the rear suspension hasn’t been properly reassembled since I tore it apart back in January. What’s the rush, ya know? In February and March, the beginning of June looks a long way off. But then early May arrives and those early ride invitations begin; a climbing workout on Arctic Valley Road (not that I really mind missing that kind of pain) or a quick ride on the Crev-Mo trails, which dry out earlier than the terrain in Anchorage.

All of a sudden, I’m missing rides because the bike they require is sitting in its corner, neglected as a red-headed stepchild because I’ve been too lazy to spend an hour or two turning wrenches. It’s pathetic.

Email ThisBlogThis!Share to TwitterShare to FacebookShare to Pinterest
Labels: spring

You'll just have to ride the pugs... Your pic reminds me, did I ever tell you how convenient eggbeaters are for opening beers?