A couple of days ago, I noticed a bicycle in the office of a co-worker who has always driven to work, so I asked what was up. She had dropped her 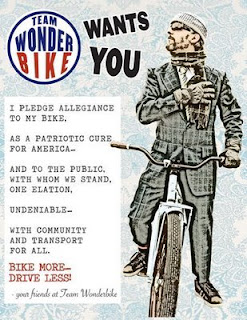 car at the shop that morning and then ridden the rest of the way to work. It was great, she said, because she realized that on a bike, she could smell what was around her. That morning’s ride had inspired her and she was thinking about taking the old bike for a tune-up.

I love hearing about the little epiphanies that are so common among people who ride to work one day and find themselves enjoying the benefits, whether they come in the form of fresh air, reduced stress, or the smells of spring. It’s a great thing to watch and listen to someone who just realized that riding to work is actually fun. (Check out the video.)

This is Bike to Work Month, and next Friday is Bike to Work Day. Companies all over town have dozens—in some cases hundreds—of employees signed up to ride. Most of them probably won’t do again until next year, if at all. Knowing this is a one-time thing for so many participants usually bothers me, and I sometimes find myself resenting the people who ride to work only on one designated day each year.

When that happens, I remind myself that if 95 percent of Bike to Work Day participants never rode to work again, it would still be a worthwhile event, because that would mean that the other five percent decided to keep trying it. That’s progress.

Everyone who knows the fun of riding to work on a regular basis should encourage co-workers to try it. Grab a map and a high-lighter and help someone plan a safe, enjoyable route. Give ’em an old pump if you have a spare that’s collecting dust. Offer them a decent used saddle when they complain that their ass hurts and you see that they’re riding a piece of junk. It’s all about making people believe, and getting them to drink the Kool-Aid.

They don’t have to gulp it.

Sips will do just fine.

(Thanks to Gwadzilla for today's picture, and the video link.)
Posted by Tim at 10:35 PM

its not the Koolaid I fear, it's the men with guns waiting to shoot me if the koolaid doesn't kill me or I try to run...seriously, if I didn't have to drop Jed at school no earlier than 7:30 then get 8 miles across town in 1/2 hour I'd try it

Heck I don't even have a job and I will be out there riding to 'work' but I know that not everyone will be able to ride. I remember a time before Bike to Work Day so just that press is great.

I have had the experience of talking someone into riding and have them turn into complete converts so I'm all over the Kool-Aid approach since the taste can do the convincing. All I have to do is fight for the bike parking spot I want as more bikes show up.

i got my bike to work tee shirt today - I am ready for Friday!! I will be unemployed by the end of next week, so hopefully i will get a few more bike to works in between, now that I have stopped whining about my ass hurting.