I spent Friday on a bike ride with my daughter’s eighth-grade class. I’ve done bike trips with large groups of kids a couple of times in the past, and it’s always an amusing spectacle.

Kids showed up on everything from shiny new full-suspension Stumpjumpers to department-store crap bikes, to drastically too-small bikes they probably got for t 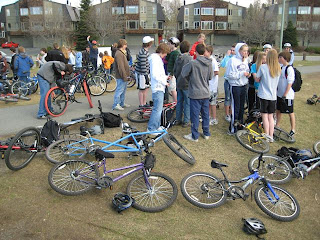 Any ride with 100 adolescents feels like several hours spent on the brink of disaster. Their bike skills range from very competent to completely clueless. Many drift spontaneously from left to right; they occasionally ram into each other; they hang accessories such as jackets and purses from their handlebars, daring the dangling sleeves and straps to wrap into the front spokes and cause a crash.

As a parent volunteer, you never quite know what your job will entail, other than general wrangling of wild young homo sapiens. Tire repair? Carrying stuff for an overloaded kid? It can vary as the day wears on. 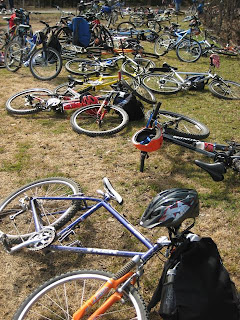 avenger hunt before moving on—the teacher in charge sent several adults ahead so that we could station ourselves at neighborhood intersections and safely direct groups of kids through them.

I moved out front and climbed a hill on N Street, setting up to cover the final street crossing. Half a block from the Park Strip, I glanced down at what appeared to be a copy of Rolling Stone in the street. Then I did a quick 180 after remembering that Rolling Stone doesn’t publish full-page shots of nekkid chicks floating on their backs in swimming pools while wearing nothing but fishnet stockings.

I mean, wow. This woman was floating on her back and had a couple of parts that were in no danger of submersion, ya know what I’m sayin’?

I glanced back toward the hill. No kids yet. I grabbed the mag, discreetly rolled it up and stuck it between the slats of a nearby fence until all the kids rolled by, then I crossed the street and shoved the scandalous publication deep into a park trash barrel.

Unfortunately, discretion prohibited a more thorough examination of the evidence that might have helped me determine who was responsible for this blatant littering. Such an offense warrants more attention, and I regret that I was unable to look deeply into the case.

Sometimes, sacrifices have to be made. You know, for the children.
Posted by Tim at 7:44 PM

In your opinion, were the pair of personal floatation devices real or bolt-ons? Inquiring minds want to know.

So when you went back early this morning to exhume the evidence, did you learn anything new?

Snakebite, I'm pretty sure they were after-market accessories. Not that I was staring.

And no new developments on the exhumation, Jeff. Someone had tossed a box containing half a pepperoni pizza in there, so I got distracted and ate myself silly on a park bench.

On the upside, some guy walked by and gave me two bucks. Score!

Glad to hear it went well. Awesome to see all those bikes in those pics you took.