Lighten up and wave

I spent 18 years riding exclusively mountain bikes, so I got really familiar with the often-discussed issue of bike riders who refuse to wave at their fellow cyclists. 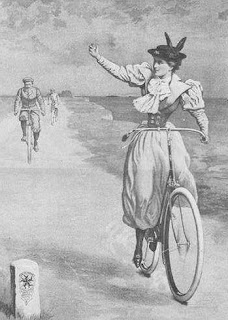 As mountain bikers, we always wrote them off as “roadie snobs.”

Then I bought a road bike.

Now, I sometimes find myself tossing a friendly wave at mountain bikers, only to get the same aloof, I’m-too-cool-to-wave-back response. So what’s the deal? Are they assuming I’m a roadie snob, so they’re caught off guard? Do I not look as hip or stylish on a bike as I’m supposed to, and therefore I’m beneath contempt? More likely, many of them are probably simply lost in their own thoughts, or they’re pricks who take themselves and the world too seriously.

Except for the high-speed, crotch-rocket crowd, motorcyclists wave at me with at least the same regularity as fellow bicyclists. They seem to be into the whole two-wheel brotherhood thing.

Bicyclists are the only people I’ve ever known who ponder the existentialist dilemma of why we don’t wave at each other. As far as I can tell, if a golfer, fisherman, Frisbee player or dog walker waves at someone who ignores him, he simply mutters “jackass” and forgets about it. But we cyclists debate it, publish magazine stories about it, or write about it on our blogs.

Dave Moulton recently wrote on his blog, “I wave to everybody when I am riding; not just people who look like me, other people on any kind of a bike, those walking, running, or on skateboards; even ladies pushing babies in strollers. They are all people like me, out getting some fresh air, and exercise.”

I think that’s a good policy: Be nice, and all that random-act-of-kindness bullshit. I don’t wave at every rider I meet, but I generally try, and I’ll keep doing it.

Hell, I’ll even wave at those free-rider types with their body armor and 45-pound, Kawasaki-wannabe bikes. One of them might even occasionally raise his cigarette into the air and wave back.

And on the subject of waving, don't forget to take advantage of the opportunity to wave at me with one finger. After my recent "Fingered" post, George suggested giving me The Finger online, so let 'em rip, folks. The Grillmeister has already provided a bird-flippin' picture and Jeff has said he'll take the challenge.

I'll do a photo collage or something. The most creative shot that contains both a middle finger and a bicycle will get special attention. Who knows? Maybe I'll come up with a prize or something. Just send them to the e-mail address from the link on this page.
Posted by Tim at 11:00 PM

Email ThisBlogThis!Share to TwitterShare to FacebookShare to Pinterest
Labels: wave

How long do we have?

I always thought roadies were snobs too until I got a road bike. And then I discovered that taking a hand off the bars at such high speeds seemed too risky. Especially since a pea sized pebble can ruin your whole day! I usually give an exaggerated head nod when at speed on the road bike, keeping both hands on the bars!

George, a deadline would seem excessively official and disciplined for a finger-flippin' contest on a dumbass bike blog, so the only answer I'll give you is ... HURRY THE HELL UP, SLACKER!

My experience is that other cyclists' likelihood of waving relates less to the kind of bike they're riding, and more to the quality of gear they're outfitted in.

Frankly, the well-outfitted seem a little too busy to wave back to me.

I may not wave enthusiastically, but I usually acknowledge another cyclist's existence by a head nod, saying "good morning", or some such. If I'm slowly climbing uphill, it may be only a breathless "huh", but I think they get the point.

FYI: cyclists are not the only people that obsess about waving:
http://www.jeeptalk.org/jeep_wave.php

For a laugh, do the motorcycle wave (hold out your left hand by your knee) to the Harley guys.

On my cross country trek last October the coolest wave/acknowledgement I received was when three totally tricked out custom choppers cruised by. I could hear and see them from about a 1/2 mile away, gleaming like diamonds in the desert sun. When they got close I sat up to get a good look as they rolled on by. The first rider gave me a head nod, that was cool. The second guy gave me the off the hip wave like Rick Logue mentioned. Man! I thought - "Respect" - that was way cool. But the best was the third guy who whipped out the forked fingers, Rock 'n' Roll Devil Horns. I forked them back at him and as he rumbled by I noticed he had the biggest schtuff-eating grin. I couldn't help laughing. Those three guys made my day. It's those unexpected bizarre things that make for a great ride.

That's a funny discussion! We have the exact same issue riding motorcycles. Harley riders seem to never wave at sport-bike riders, and the other was around too. The Harley riders will give a wave to a 'metric cruiser', but quickly retract it when they see it is not an 'American' bike. Sport and Harley riders always wave to each other. If you're on a scooter, don't even think about waving -that's not a real motorcycle! ;)
I'm glad I found your blog. I wave to you from SouthCentral.
mdoncall.blogspot.com

I always say G'day when I pass a rider or at least lift the fingers without letting go of the handlebar when seeing other riders.