“This is the year,” a fellow bike commuter said to me the other day. We were talking about high gas prices inspiring more people to try riding to work, or taking mass transit, and she was expressing her hope th 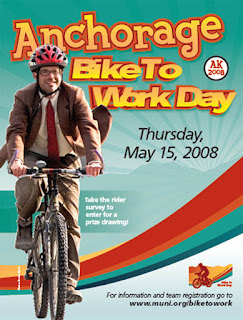 at we’ve reached a moment when large numbers of people will see the light.

I’m not convinced, because I’m too jaded from years of seeing a surge of new bike commuters in May, then watching them all disappear by June. But I hope she’s onto something.

With Bike to Work Day coming up tomorrow, the interest in bike commuting is as high as it will be all summer, unless gas jumps to five bucks a gallon. I saw an older guy buying a brand-new commuter last weekend; I’ve been seeing more riders each morning and evening, and the Daily News ran a small feature in this morning’s edition to help new riders prepare for riding tomorrow. (Complete with advice from moi.)

In recent summers, I’ve been trying to follow some advice I read on Patrick O’Grady’s site a few years back. Observing that many non-cyclists are put off by all the gear and unusual clothing that they associate with bike riders, Patrick suggested a way to make bike commuting look more accessible—more “normal,” if you will.

Instead of pulling on Lycra shorts and jerseys covered with flashy graphics and logos, maybe we should be donning hiking shorts, T-shirts, Hawaiian shirts, etc. Rather than looking like a club of athletes or wannabe racers, why not dress like average folks out having fun?

I think he made a good point. The more fun and accessible bike commuting looks from the driver’s seat of a car, the better.

So I still wear my Lycra shorts many days, but I often pull a battered old pair of cargo shorts over them.

It’s not because I’m shy about wearing Lycra.

It’s because I hope that occasionally a motorist will see me riding to work and think, “Hmm. Maybe I should try doing that.”
Posted by Tim at 6:45 AM

I'm with you on the jaded part. My girl was telling me about an article in a the paper that had tips on how to reduce gas usage. Not a single tip was public transit, cycling, or anything like that. It seems some people can't wrap their heads around the No Driving concept.

On the other hand, I had a nice chat with a guy on the ferry this morning who's been riding his bike into work lately on fair weather days to save money.

I seriously hope a ton of people start using alternate forms of transportation this year.

I wear lycra becasue its comfortable. I hear what you say about making people feel its more accessible but I really can't see cyclist giving up their clothing to get others involved. The gas price will do it.

I hardly ever wear flashy kit on the way to work. Why? Because I'm on my way to work, not to a race or a training ride. I wear MTB shorts and a conservative jersey. People stare less at the c-store at 6:00 am that way. Also, I think I'm less of a target.

I got guff yesterday because I wore sandals while biking.