Everybody’s been talking lately about the bleary news we face every day. Bush’s debacle in Iraq, the tanking economy, the soaring cost of fuel, yadda, yadda, yadda. But there’s good news to be found, 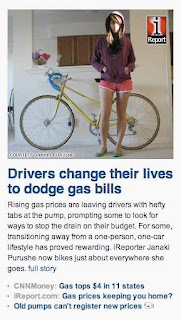 if you know where to look. And a good place to start is any news story that opens with a photo of a cute bike commuter wearing a hoodie and killer shorts.

This is a photo of Janaki Purushe, who owns a car but has discovered the joys of riding to work and running errands on her bike. She’s not alone.

On Monday, the federal Department of Transportation announced that its figures from March showed the steepest decrease in driving ever recorded. And the government's been tracking such things since 1942.

OK, so it was only a 4.3-percent drop from a year earlier. It’s a start. And it translates into 11 billion fewer miles driven by American motorists.

Even here in Alaska—where the full-size truck and SUV are king—people are changing their ways. A guy interviewed in the local newspaper a few days ago said he would continue making his long drives to the Kenai Peninsula for weekend recreation this summer, but that he’ll be riding his bike to work so that he can save on gas money.

Even if he doesn’t look as good as Janaki in a pair of shorts.
Posted by Tim at 12:49 PM

It's good people are starting to find alternatives to car. My landlord recently took to cycling and he was really surprised to how much he enjoyed it. (after getting over jelly legs for the first two days)