Today is a time to celebrate. We have finally entered double digits in the number of days left in the Bush presidency. It’s been a long time coming.

But it’s also a day to remember a lost opportunity. 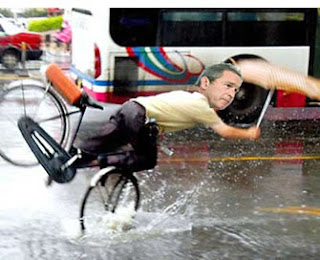 For the first time, we had a president who liked to spend his free time mountain biking . But he didn’t do a damned thing for us. Didn’t lift a finger to further our cause. No funding for new trails. No defense of our rights to access of public lands. Nothin’. A big, fat zero. To be fair, I doubt he knows there are millions of other people who love mountain biking. I mean, he took up the sport after becoming president, and he lives in a high-security bubble. I’m pretty damned sure he’s not going to learn about the rest of us by reading.

I once saw something from IMBA about how we need mountain bikers on municipal committees and in state legislatures, Congress, etc., to give us a louder voice and greater legitimacy in the public eye. To have a mountain biking president should be the ultimate way to advance our cause but, with Bush, it has only inspired frequent jabs from Maureen Dowd at the New York Times, who likes to point out that when this or that major event occurred, the president was "out riding his bike" instead of doing his job.

Considering how he wrecked everything else he touched, we should probably be glad he made no attempt to help mountain bikers. With his record, any effort to help would probably have been a nail in the sport's coffin.

But I’ve often found myself how different things would be today if Dubya hadn’t become our first court-appointed president despite the majority of Americans voting for Al Gore in 2000. Or what if so many voters hadn’t been in a coma four years ago, and we’d elected John Kerry, the guy who rode a custom Serotta Ottrott? Now there was a guy with brains and good taste in bikes.

I wouldn’t expect any president to make bicycling a big priority when it comes to domestic policy, but a little effort to encourage bike commuting, or trail building, or something, would help.

After all the presidents we’ve had who liked golf, jogging, tennis, etc., it would have been nice if the first one to enjoy mountain biking could have enhanced the sport’s image, instead of making it the butt of jokes.

Funny you should mention this - I just got an email from my old club, Mid-Atlantic Off Road Enthusiasts (MORE). One of their members regular writes the pres and tells him he should ride one of the local trails (Rosaryville). Evidently, a group showed up recently to the park, just in time to catch the pres leaving. I think he normally hits some local trails that are usually closed to bikes...

WASHINGTON (AP) — The Bush administration plans to make it easier for mountain bikers to gain access to national parks and other public lands before the president — an avid cyclist himself — leaves office.

The National Park Service confirmed Tuesday that it is preparing a rule that will allow decisions about some mountain bike trails to be made by park managers instead of federal regulators in Washington, a process that can take years.

A park service spokesman said the rule would be proposed no later than Nov. 15 so it could be final before Bush leaves office. If adopted, the proposal would likely result in more mountain biking opportunities on public lands.
Currently, the Park Service has to adopt a special regulation to open up trails to mountain bikes, which requires the public to be formally notified. The same process is required for all-terrain vehicles and other motorized recreation on park lands.

“We are trying to give superintendents a little bit of latitude especially for non-controversial proposals for bicycling in parks,” said Jeffrey Olson, a spokesman for the service. “We are responding to public demand.”

Environmental advocate Jeff Ruch called the rule a lame-duck gift for the mountain biking lobby from the “Mountain-Biker-in-Chief,” referring to Bush.

They announce this the day after my post. Coincidence?

Maybe his aides read my blog to him!