I’ve heard a lot of people say customer service is extinct. It’s often hard to disagree. When I had to deal with the Sears appliance repair people last week, I came clo 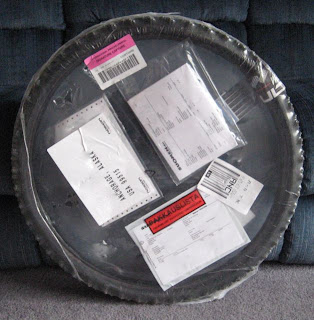 se to throwing my phone on the floor and stomping the shit out of it while wishing I could do the same thing to several people I’d spoken with that day.

Fortunately, the bike industry seems to have a lot of cool people who stand behind their products. When my sidewall failed on a three-year-old Nokian Extreme studded tire last spring, I sent photos to the manufacturer and waited for a response like, “Ooooh. Sucks to be you. It’s out of warranty.” But that didn’t happen.

Instead, some dude in Finland asked me for a code number on the tire, and then told me it was still under warranty. He asked for my address, shrink-wrapped a new tire in thick plastic, slapped international shipping labels all over it, and mailed it directly from the factory.

A couple of weeks ago, my daughter was inflating the tires on her Rockhopper when the handle a

ssembly on my old Topeak Twister floor pump broke loose and came completely out of the pump. The thing is nine or 10 years old, so I figured it was probably a goner but I really wanted to repair it. I hate throwing stuff in a landfill before it’s time, and somehow it just feels good to keep old stuff working. Besides, I’ve always thought something as simple and serviceable as a floor pump should last damn near forever.

It’s a first-generation digital model, and the old disk assembly that held the O-ring had finally fatigued and snapped off. The head of the disk unit was held in place by a crimp in the bottom of the handle shaft, so it looked like a cheap assembly method that was never designed to be repairable. I momentarily thought about throwing it away, but the idea of trashing the whole pump over a cheap piece of plastic seemed like a waste.

I got on Topeak's website and filed a note with a digital photo of the broken part. After exchanging a couple of messages to nail down the pump model, the Topeak guys mailed me a new, better-built handle assembly with an adapter to make it compatible with the old pump. No haggling, no hassle. I was impressed.

When I installed the new handle a couple of nights ago, everything worked flawlessly, and the pump is probably good for a few more years.

It’s a beautiful thing when someone’s willing to provide quick service and a free part for a product that’s years beyond its warranty period.
Posted by Tim at 6:00 AM

Your post makes me want to run out and buy that Topeak Road Morph frame pump that I've been meaning to purchase ever since my last one got stolen in 2003.

As someone who works for a company that manufactures for the public, it is nice when people let us know when a product needs adjustment. From our perspective, an easy repair is worth dollars in advertising. your post is case in point.

Pretty cool about the Finn though.

I like 'feel good stories' like these ones in a time and age when everybody just complains about bad service. And I have a new found appreciation for my husband's attachment to our old floor pump that leaks and shows wrong pressure on it's gauge but he keeps fixing it. I guess I'll stop nagging him about buying a new pump. :-)