While the folks in Congress were mortgaging our future last week, they stuffed the Big Bailout Bill with all manner of special provisions they called “sweeteners,” as in, “You want my vote, ol' boy, you’re gonna sweeten the pot by attaching my pet project to this here 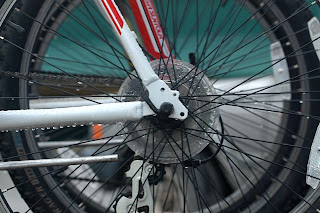 big-ass boondoggle. 'Cause when things go tits-up anyway, all that's gonna matter is how much money I got for my district.”

None of these so-called sweeteners had any business being attached to legislation that was allegedly designed to save us all from an economic meltdown and financial ruin, but the suits did manage to squeeze a few positive things into the Emergency Economic Stabilization Act of 2008. One of them was “Sec. 211. Transportation fringe benefit to bicycle commuters.”

In a nutshell, this thing provides money that will allow employers to reimburse bike commuters up to $240 per year “for reasonable expenses incurred by the employee during such calendar year for the purchase of a bicycle and bicycle improvements, repair, and storage, if such bicycle is regularly used for travel between the employee’s residence and place of employment.”

That sounds like a pretty cool thing, but—brace yourself for a shock here—there’s a catch. You can’t just apply to the government and get a check. Your employer would first have to work with the government (and we all know how easy that is) to develop a reimbursement plan. Then the Big Boss Man could pay you, but then he’d have to ask the government to reimburse him.

Which is OK, I guess, if your employer is sufficiently enthusiastic about alternative transportation and willing to wade through some red tape. Personally, I’m not holding my breath. I don’t know about you, but the corporation that owns my office ain’t exactly progressive on things like this, and I just can't see our payroll or HR people being willing to take on extra paperwork.

A few years ago, when we were preparing to move into a new building that was being remodeled for us, we suggested spending a miniscule portion of the overall budget on a couple of showers so that bike commuters and lunchtime runners could enjoy healthy lifestyles and clean up before going to their desks.

I don’t want to say they laughed at us, but from the corporate reaction, you’d think we had asked for free tequila and strippers every Friday afternoon. Hell, I considered it a success when I managed to ensure that an old steel bike rack would stay inside the building after it was left behind by the previous building owners.

There are plenty of employers willing to spend a little effort to help bike commuters. If you work for one, start talking to them about the provision in the bailout bill. Try to get some cash in your pocket.

It’ll be the best use of money tied to this whole mess.
Posted by Tim at 6:08 AM

I did a breakdown of how Sec. 211 fits into and modifies the existing IRS code.