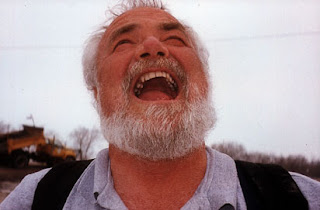 inflate a bad spare tube, I haven't managed to spend any time on a bike this weekend. I was busy hanging out with my man Buckwheat, who doesn't get to Anchorage often.

We ate some good food, had some good laughs, and did a little truck shopping because on the way up here from Skagway, he managed to drive his Toyota Tundra up ass end of a bull moose.

I did, however, manage to get the studded Nokians on the commuter tonight, just in time for a forecast that calls for snow and temperatures in the 20s and low 30s.

That's it, kids. Our three weeks of autumn have come to an end.
Posted by Tim at 9:38 PM

hmmmm....
everyone in DC drives SUVs
well... either an SUV or a Toyota Prius