I could never get into the yellow wristband thing. I know the cause was noble, but it felt too much like a fad. Still, I ended up with a few because occasionally a co-worker would buy a 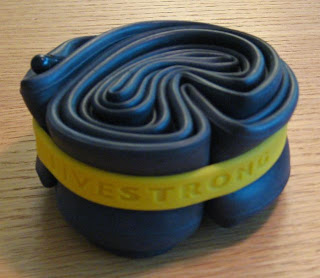 n extra one for the Office Bike Guy.

So when I rolled up a spare tube the other day and was trying to figure out how to keep it from flopping around in my commuter bag, I happened to remember that there was still a Livestrong bracelet in my desk.

And ya know what? That thing made a freakin’ perfect tube wrap! It was just stretchy enough, and it’s made of fairly thick silicone so it’s not prone to dry rotting like a rubber band. Hell, I could use five or six more of these things just to wrangle the spare tubes on my workbench.

Millions of these things have been sold, but how often do you see anybody wearing one these days? They’re just lying around in glove boxes and junk drawers, waiting for second lives. I say it's time to yank those puppies out of storage and put 'em to work.

Besides, what better way to raise awareness of cancer, recycling and flat tires all at the same time?
Posted by Tim at 6:00 AM

Very Clever! I have several bracelets from causes that jumped on the Lance bandwagon! Time to put them to good use and of course they'll all get their "air" time. :-)

you know, thats what they were originally, they are called ballers (an ironically appropriate name for Lance) and one of his sponsor companies used them to "ball up" stuff just like that

Great idea! Wonder if they will wrap around a 29er tube? ;p

brilliant! for the first time I actually want one.

super!!
My favorite news-weather guy here in SF still wears one, and I think its cute. I know he is a surfer and def. represents unity in athletes and those who love sports.

Wow... GREAT use for that thing. I'll no longer suffer from guilt for not wearing the ugly-wrist thing....

Awesome idea. I now know what to do with the half a dozen or so that I have here and there about the house.