Light up the night

On a four-day field mission, a U.S. soldier will often carry 20 to 40 pounds of batteries to power gear light 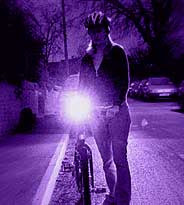 So the Department of Defense is offering a $1 million prize to the company that can come up with a prototype battery that weighs less than nine pounds and can produce 20 watts of power for 96 hours.

According to CNN, "the military hopes these power packs may also have commercial use in camping, hiking and other outdoor activities."

I don't know about you, but I want to buy a new bike light in about six years.
Posted by Tim at 8:49 PM

Email ThisBlogThis!Share to TwitterShare to FacebookShare to Pinterest
Labels: lights