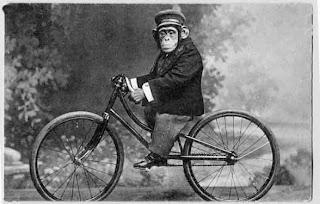 ood is threatened if someone passes them while they’re riding a bicycle.

This guy was a textbook case: Dressed like an Eminem wannabe; no helmet; cheap, squeaky, ill-fitting bike with a rear wheel that wobbled like an epileptic trout; and horrified by the thought of looking gay if he allowed someone to pass him—especially some pansy-ass old man with a nerdy commuter bike and too much gray in his beard.

I didn’t mean to bother him. Seriously. I just couldn’t help catching up to him, because I don’t smoke three packs a day and I don’t ride a piece of shit that’s way past its Costco prime.

So he glanced over his shoulder and saw me gaining on him. His jeans-covered legs and oversized sneakers starting spinning like a cartoon character who has just run off a cliff and is trying to run back to it before gravity kicks in.

I couldn’t help myself. I held the gap steady for a few hundred yards before letting him get away a little bit. Then I closed it until he resumed acting like a meth-crazed ferret.

Then I did it all over again.

Maybe I need professional help or something. It was too freakin’ fun to describe.

It was like teasing a really stupid cat with a piece of yarn.
Posted by Tim at 7:00 PM

"It was like teasing a really stupid cat with a piece of yarn."

That's just brilliant. Good for you!

LOL.
Just the right thing to do. Maybe sometime they'll learn... not.

I've done the same thing in the past. Being a middle aged geezer can be fun sometimes:-)

That sounds like a lot more fun than simply overtaking.

Bill Strickland, Bicycling editor, has a similar column in the most recent issue. Good stuff.

I got caught by a young kid on an MTB. "I did pretty good to catch a road bike on a mountain bike." he said as he pulled along side.

He didn't know quite how to respond to that, and dropped back behind me.

Sweet! I'd have loved to see that dude's face. Great response.