A Podium Girl was driving in Le Caravane when her cell phone rang. It was her boss, urgently warning her, "I just heard on Race Radio that there's a car going the wrong way in the Caravane. Be careful!"

"It's not just one car!" said zee Podium Girl. "There's fucking hundreds of them, and bicycles, too!"


I was going to title this post “In hon 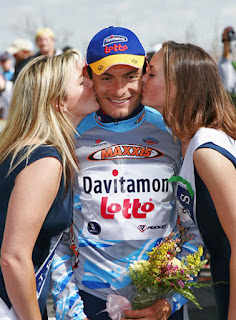 or of the Tour de France,” but then the news broke about Alexander Vinokourov and I was reminded that words like “honor” and “pro cycling” have little to do with one another.

Maybe the only good thing left in pro bike racing is the Podium Girls, those lithe young things in modest skirts who hand successful racers their flowers and stuffed animals, then plant a few kisses on their cheeks.

Sure, the sport is in a Dumpster in the back lot of a Belgian hotel, lying atop a pile of discarded EPO vials, but hey, we’ll always have Paris. And the Podium Girls.
Posted by Tim at 1:35 PM

And another one for you, Tim:
http://www.secretsofthepeloton.com/index.htm