After my post last week about the ratty-ass bike from Sports Authority, another blogger accused me of being a bike snob. It seems that every time I write something about crappy bikes, someone calls me 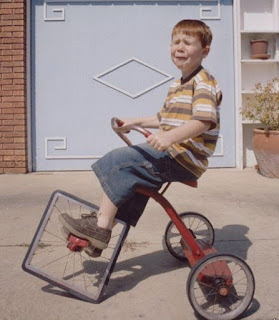 an elitist and points out that such bikes might teach their owners learn to love riding. Yeah, yeah, yeah, I know.

Coors Light teaches a lot of people to love drinking beer, and I don't know a single beer-loving bicyclist who wouldn't make fun of somebody for drinking that piss in a can.

I'm not really that much of a snob. I'm more of a critic of shitty consumer products. I don't expect everyone to ride $2,000 bicycles, but I think it's pretty stupid for consumers to be unaware that they'll get much more for their money by spending $400 in a bike shop instead of $125 at Wal-Mart.

Most people wouldn't buy a $10 clock radio from a no-name brand when they could get a Sony or Sanyo for $20, because they know they'll probably end up being late for work when the crappy product breaks. Why should a bicycle purchase get less thought or attention?

I'm glad there are cheap bikes available for people who can't afford anything better. And I admire people who pull bikes out of Dumpsters or buy them at yard sales for a few bucks and then fix them up enough to make them functional and use them every day to get to work or to run errands. Whether they do it out of passion or necessity doesn't matter—it's a cool and noble thing to do.

But to go out and buy a piece of junk because you don't know any better, or because you think a modern bicycle shouldn't cost more than what your parents paid for a bike 25 years ago? That's just dumb.
Posted by Tim at 12:10 PM

Email ThisBlogThis!Share to TwitterShare to FacebookShare to Pinterest
Labels: cheap

If I got this blog link from you to start with, I apologize. I forgot how I came upon it!

$99.99 mtb. at Canadian Tire - this guy has a decent bicycle but wanted something to commute on that he didn't care about if it was trashed, stolen, etc. He started in mid-March and is chronicling his adventures in repairs.

Not a bad read.

He KNOWS how to tinker with bike issues...

(the wheels and BB have given him particular troubles)

We went "camping" with some friends at an RV Resort earlier in the month. There were giant RV's everywhere. Tens of thousands of dollars a piece I'd imagine. There was probably not a bicycle over $120 in the whole place though. People have no problems paying for high price cable TV, RV's, cars, houses, drugs, etc., but they'll be damned if they're gonna pay a lot for a bicycle. And by a lot, I mean over $120. But for that $120 they want it to be loaded with all the bells and whistles. Gotta have the full suspension. 1 inch travel triple crown forks, baby!

Food is another thing that most people have a hard time paying more for...

What does Coors Light have to do with beer? I don't get it...

I think you hit the nail on the head with your last sentence:

But to go out and buy a piece of junk because you don't know any better...

A lot of folks don't realize that better bikes are available because they never see them in the stores. Most folks never go into a real bike shop, they just see what is available at the local discount department store.

Maybe we should work harder on promoting better bikes in the stores. Those same stores would never sell crappy guns, electronics, etc (Okay, maybe they would, but they also sell good quality stuff too). On the other hand, I wouldn't want to buy a Trek or Giant that was assembled by the teenagers that work in the toy department.

I'm with Tim on this one. Sort of. When I used to work in the bike shop we called them supermarket-specials or irn-bru bikes. People will go and spend very little money on a ill fitting, badly put together machine entirely unsuitable for use. After dragging 50 pounds of heavy arsed badly damped bouncy steel full suspension they get off thinking "if this is cycling forget it"

I have the same opinion on computers - i get people saying - why should i spend $X on an apple mac when for $300 less i can get a PC from Dell that has all i need it to do?
Yeah and if you buy a burger from mcdonalds it will fill you up the same as something from a good restaurant - but if you're gonna do it you might as well do it right and with style ;)

Beer snob here. It's beer for god's sake, don't reward companies that try to pawn off melted yellow snow as beer. As for bikes, most people who buy department store bikes can't afford more, don't realize why they should pay more, or don't value the purchase as anything more than a toy that won't get much use.

And Jeff, I've noticed the same thing. Super-expensive RVs with cheap ass bikes strapped to the ladder on the back. I'm guessing there aren't any top-shelf rigs kept inside like I'd do if I was tooling around in my own condo on wheels.