Don't it always seem to go
That you don't know what you've got
'til its gone
—"Big Yellow Taxi," by Joni Mitchell

I'm in a bad spell for bike commuting. Schedules and obligations at home have been forcing me to drive to work, and that'll be the case for much of this winter.

I really shouldn't complain. My drive to work is only a little over three miles (the fun way—by bike—is longer) and I can get there in less than 10 minutes. But I hate driving to the office. Evening and weekend rides are 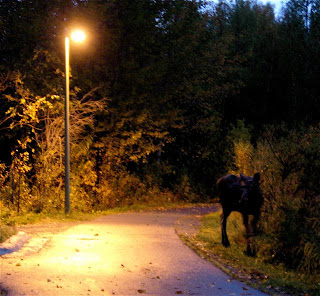 great, but getting to work on a bike feels like doing the right thing and cheating the system all at the same time.

I was able to ride Tuesday for the first time in two or three weeks, and damn, it felt good.

There I was, pedaling along, dreaming up blog posts that will piss off hockey fans (just kidding, Luke) and cruising through the darkness on damp streets and trails. I watched the sky grow light over the Chugach Range and felt my legs spin easily as my slicks quietly hummed along.

I was feeling so good that I couldn't even get annoyed by this young bull moose that declined my gentle invitation to clear the trail. He was just another reminder of the cool route I ride to work. I snapped a few pics before he decided to slowly push me backward. He stared me down and kept approaching, so I stashed the camera and went a couple of blocks out of my way rather than attempt to ride around him at close range.

Maybe having my bike commutes cut back for a little while is a good way to remind me just how sweet every trip on a bike really is.

Never take your daily ride for granted.
Posted by Tim at 10:25 PM

Here is Wisconsin we have the same problem, only with dairy cows.

Man, I miss that cruise -- and the view of the Chugach on the way in -- along Campbell Creek, I'll tell you that. Thanks for making me melancholy again (as if this shithole known as SoCal didn't do that already).

Great post! I'm in the same boat as you for another day and a half, unfortunately. My wife and I just had our second child, and I need to drive to work right now so I can pick up our son from his day care while she's on maternity leave (the center is near her office, not mine, but we are trying to keep his schedule consistent while he gets adjusted to the new face in the house).

She'll take over again next week, but she had a two week period after the birth where she wasn't allowed to drive at all. Meanwhile, I'm getting too much paunch, not enough stress release, and no one's getting much sleep with a new baby in the house!

Damn, Luke, I thought surfer dudes were supposed to be all laid-back and relaxed. I tweaked the the wording to keep you from getting a headache -- I think the stressful atmosphere of that human quagmire called Southern California is stressing you out!

What's the deal? Is your apartment in the path of a sink hole this morning? :)

As for needing an editor, no sweat: I'm preparing the enormous blog budget for the next fiscal year and I anticipate some staff changes.

I thought that was a wolf until I read the post!

There is some great stuff in here! I especially like "getting to work on a bike feels like doing the right thing and cheating the system all at the same time."

and "carried all the automotive inmates to another day at work"

I'm moving into the city the beginning of November. Only 2 miles from work! Bicycle commuting time...

My old managing editor at the magazine would have had my head if I passed this copy along.

How 'bout that sinkhole?! And then there was a huge water-main break in the same area yesterday. I tell ya...it's the apocalypse.

"Quagmire" is right. But I just sold the motorcycle, so I'll be bike commuting a whole lot more now. I'm comin' over to the dark/light side, Timbo!