One in a million

Sunday started with a bang. A 70-mph, blazing-down-the-Kansas-Turnpike bang. It was followed by the sound of my b 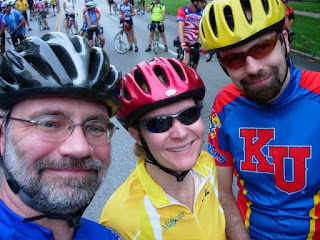 rother saying, "Shit!" as he looked in his rear-view mirror and saw a bike flying through the air after it came loose from his roof rack.

I have to admit feeling a guilty shot of relief when he said it was his.

Through some freakish occurrence of luck and physics, his Cannondale hit the pavement, slid onto the shoulder against a concrete barricade, and suffered only superficial damage while managing to avoid being run over. After a few adjustments and a vow to be more careful when racking his bike in pre-dawn darkness, he was able to ride the Octoginta with no problems.

I think he had his bike-protection mojo working this morning. 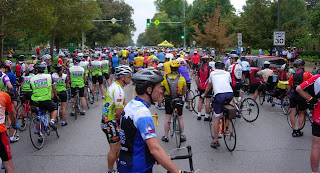 Lining up for the mass start. 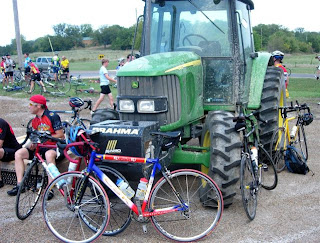 A Kansas-style aid station, complete
with a John Deere tractor. 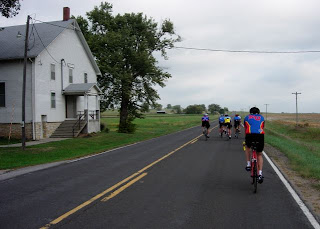 My brother riding through the countryside
on his death-defying bicycle. (My sister-in-law,
shown in the group photo at the top of this post,
was pulling up from behind as I shot photos
with one hand and steered with the other.) 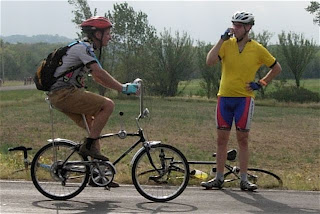 Mr. Retro and Mr. Can You Hear Me Now? share
a brief encounter at the second aid station.
Posted by Tim at 2:20 PM

Here's an article on your ride.

Thanks, Jason. And how about that story saying people came from as far away as Utah and Minnesota? What's up with that?

The guy from Alaska isn't feelin' the love!

what exactly is that guy on the folder sitting on? looks like his seatpost goes straight into his belly...

That's not a folder, it's a Stingray-style bike with a banana seat. And that hot little piece of bling on the top tube ain't a coupler, it's the base of his stick shift, baby!