This one time, at goon camp

I was reading "News of the Weird" in a weekly rag while eating lunch one day last week, and I saw an item about a goon from the National Hockey League opening a special camp for aspiring thugs. 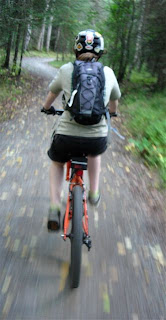 Parents who want the best for their young hooligans pay this guy and his brother to teach the little tykes how to assault their opponents just like their toothless heroes do it on TV.

Now, I've never been much of an entrepreneur, but if I were Tonya Harding I'd rent the adjacent sheet of ice and start a class for the figure-skating sisters of all those young hockey players. You know, teach them stuff like triple axels and how to win competitions by getting fat bodyguards to break the knees of better skaters.

There are plenty of parents eager to pay for anything that will give junior an advantage in this hyper-competive world, so why not make a little coin while helping kids pursue their dreams?

Of course, you'll never make a buck off some people. Don't waste your time trying to entice those lazy parents who take the cheap route. They buy their kids mountain bikes and then piss away their weekends riding trails, splashing in streams, eating snacks and having a bunch of pointless fun. These foolish hedonists deprive their children of educational trips to hospitals and deny them the dream of being among the .002 percent of people in their sport who will become rich and famous.

I mean, really. Those bike-riding freaks don't even like to fight! And forget about gettin' them to spit at other kids, or hit them with sticks. They see someone in distress, do they pop 'em upside the head with an elbow? Noooo. They ask them things like, "Got everything ya need?" Sometimes, actually stop and help people do things like changing flats!

They meet new kids on the trail and won't even call them names. They engage in all manner of unnatural behavior, like sharing trail information and going on bike rides together as if they want to be friends.

It's not really the kids' fault. It's those parents who buy them those silly bikes, spend time with them and take them out for post-ride hamburgers. Such people don't care enough to give their kids the benefit of some hand-to-hand combat skills. It's a shame, really.

It's a good thing we have hockey fighting camp, or next thing you know, everybody would be having fun.
Posted by Tim at 5:45 PM

Email ThisBlogThis!Share to TwitterShare to FacebookShare to Pinterest
Labels: kids

C'mon, Tim...it's just a little, good-natured puck fun. Besides, you should see the chicks at the girls' camp. Grrrrr...

Fighting is a part of hockey. North American hockey that is. I would watch Dynamo play in Moscow as often as I could get to a game and every time there was a big hit, I'd yell "fight, fight" in Russian. They never did. My sister in-law's boyfriend plays for the Frankfort Lions and he lead the team last year in fights. 3 of them.

Fighting in hockey is a result of North American culture. In hockey there are fighters, and there are those who don't fight. If you don't want to fight in hockey, you won't get into one. That's a fact. CBC does polls all the time on whether or not fans think fighting should be banned from the NHL. They do it just to humor themselves. We love hockey fights. I usually get to at least 5 NHL games a year, and if I don't see a fight at any of them, I feel ripped off. In my Canadian opinion, hockey is one of the greatest sports (of course from a Canuck), and fights help make it so.

I hear what you're saying, Jerome. To some degree, I share the opinion: I can't imagine why anyone would be a spectator at an auto race (or a mountain bike race, for that matter) unless they're hoping to see a cool crash.

On the other hand, I'm an old-school guy who thinks sports should be about athleticism and skills. Brawling diminishes the beauty.

This blog post is really has more to do with my concern about the culture of youth hockey. There are always exceptions (I know some good kids who play hockey) but most of the hockey kids I've encountered are obnoxious punks.

Most of them have been taught to be macho little assholes, and they don't know how to draw the line between on-ice and off-ice behavior.

On the other hand, every time I go to a mountain bike race. I'm struck by how most of the young people I encounter seem like really nice kids.

I think the two sports have very opposite cultures (at least at the amateur level, where kids are most affected) and I'm really happy that my daughter came home last night splattered in mud instead of blood.

I agree with the youth aspect of the sport. I was never allowed to play competitive hockey (cause they played on Sundays) but the kids in my school that were the best hockey players were certainly little pukes more than anything. I know that in Canada (at least the local hockey that I follow) they've really tried to counter that. Everything from the players having to show up to games is suite and tie to mandatory community service. Fist camp doesn't seem to fit with that.

I do think that putting more emphasis on the skills; passing, defense and goal scoring should be paramount. Maybe they should mandate that any kid who enrolls in such hockey fighting camps have a certain performance level. I.e., the dolts who really can't play the game won't become valued players just for their skills at clobbering the opponent. Who knows.

I wonder if road racing clinics exist for review of the latest doping practices for the up and comers?? - Bad joke.

I'd say there's good and bad to all sports.

Jeff. You're right. We go to see a fight and a hockey game breaks out. ha ha

There's fighting in hockey because the perverted, twisted fans that watch hockey want it that way. I've heard the excuses that the fighting relieves tension in certain players, but that's a crock.

Look at football. There's far more contact in football than hockey and almost no fighting. When fighting does happen in football, the penalties are swift and long-lasting. The NBA is the same way. Fights happen, but the penalties are much harsher so the fights are fewer.

If hockey would enforce a rule that just taking a swing at someone was a 10 game suspension, the fighting would stop instantly. It only remains because the sick fans want to see a fight.

That's why I don't take my kids to hockey games much. I'd rather take them out for a bike ride.

First off: Tim's post wasn't about fighting in hockey, per se. And while I am weary of his gross generalizations about team sports -- and then his indignation when I make observations about similar behavior among mountain bikers/cyclists/whatever -- he's not far off with how ridiculous a how-to-fight camp is for 12-year-olds.

But since this post has devolved into a discussion of fighting in hockey...

If you get rid of the fighting, the stick incidents -- seen and unseen -- will increase, and that's where people get really hurt. Fighting on the ice rarely results in injuries, and the simple fact of the matter is that intimidation DOES play a role in the game. I was never much of a fighter but when I played in Europe, but I made sure the opposition knew I was North American by wearing a CCM helmet and making sure I got in a good check on my first shift. Once I did that, there was just that tiny bit of extra space...and that made all the difference. Fighting IS a part of hockey; those who say otherwise have never played the game. It's not part of football because of the stupidity of throwing punches at a face mask. I played rugby for long time and there was no fighting there...but there certainly were cheap shots and unpleasantries when the ref wasn't looking.

The bench-clearing brawls, the goons...that could all be eliminated from hockey with no detriment to the game.

The easy way to clean up the NHL and still have appropriate fighting? Cut the rosters to 16 or 17 skaters (plus goalies). Now the teams can't afford to carry the goons so the only fights are between hockey players, not boxers. But the players' union will never allow that.

You're right Luke, my post wasn't really about fighting in hockey. It was about the nefarious influence of fighting on the culture of youth hockey. And I understand the difference between flagrant fighting and the inherent danger of contact sports.

During my brief stint as a mediocre player on a bad high-school football team, we were all coached on the importance of the big hit that had to be made during the first play of each game.

We were all trying so hard to establish our dominance on that first play that it's sort of amazing that we didn't suffer 50 percent of the team's injuries in the first 10 seconds of each game.

But we didn't have a designated team "enforcer" and we weren't taught how to fight—just how to tackle and block.

Sending a kick to hockey camp to learn checking skills is one thing. Sending him to a camp that teaches him how to drop the gloves and beat another kid senseless is just wrong, in my opinion. I think it borders on child abuse.

After all, if a kid habitually did on the playground what he is encouraged to do on the ice, he'd be arrested for assault and confined to a detention center.

I do like your idea though for eliminating fighting by cutting rosters to the point that suspensions would be unbearable.

You've got my vote for league commissioner!

My point is that I don't think the violent elements of sports like football and hockey are necessarily bad. Controlled violence within the rules of the game can be part of the character of a sport.

But turning it into an undisciplined brawl taints the game.

In the words of the Constitutional Peasants from Monty Python and the Holy Grail: Now we see the violence inherent in the system!!!