The Road Goes On Forever

Anyone who thinks the Midwest is a flat wasteland needs to come ride here. Over the past four days, I've ridden 181 miles and climbed 10,596 feet. I've crested hill after hill only to see another hill waiting. 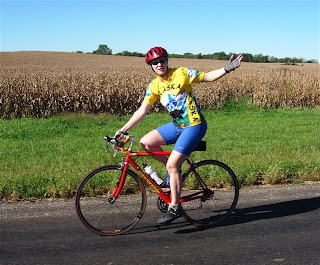 Sometimes—just to make things more fun—there has been a second, taller hill waiting so that we could see two climbs directly ahead of us.

OK, so these hills aren't quite the Alps. But they can stack up one after the other like a quad-eating roller coaster from hell. After three or four hours in the saddle, all I want to do is raid my brother's beer fridge and sip a frosty one while I soak my cooked carcass in his hot tub.

Living in Alaska, I tend to forget how extensive the road systems are in the Lower 48, especially in the farm country of the Midwest. Old county and state highways seem to be everywhere, so there is a mind-boggling array of options for road cyclists when they start planning rides. Even though there's an extensive community of cyclists in the area, meeting other riders out on the road is fairly rare because they're scattered over so many miles of pavement.

Even the drivers here deserve some credit. I don't know if it's because they're not sure what to think of the crazy people who wear funny clothes and ride bikes in the middle of nowhere, or they've decided to be nice to cyclists here on the edge of the homeland of the Tour of Missouri, but motorists have been cooperative all week (so far).

To the UPS driver who followed us for half a mile at 20 mph and then gave us a friendly wave when you finally had room to pass, and to the drivers of pickups and cars who patiently waited to crest hills so you could move to the left and give us plenty of room as you passed us on roads without shoulders: Thank you.

I may take a shot now and then at Midwestern ways (I spent the first 18 years of in this part of the country, so I have some baggage) but this place ain't all bad.

If you get a chance to go ride on the KATY Trail, it will be nice and level; pretty to. Glad you're getting some nice weather while you're here.

is that your heart monitor or the elevation?
yeah, last time I was in Wisc, I wished I had my road bike... in february! dry roads and 40 degrees!? - not like it was when I was a kid.
If we don't see you when you get back, we'll see you in Nov. ... Jon & I are off for lower 4-8 ourselves.
mtn bikes. slickrock. utah beer. something like that.
rose

We have rollers, false flats and 30 mph winds to make up for the lack of elevation.