It seems I can't pick up a magazine these days without being bombarded with headlines about my "carbon footprint." Everyone's trying to tell me how to reduce my impact on the environment.

The whole thing is long overdue, in my opinion, but I can't help wondering if it's too little, too late. The world's goin' to hell in a handlebar basket, from what 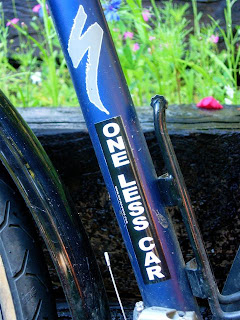 I can tell. Then again, I'm probably just a cynical old fart. Not so cynical that I've given up, though: I haul a load of cardboard, glass, aluminum, plastics and paper to the recycling center every few weeks, and I'll never stop commuting by bike. Some part of me must think there's still a reason to try.

Many of us were riding bikes to work for years before we ever heard of a carbon footprint. We just did it because it felt like the right thing to do, and it was a hell of a lot more fun than stomping on a brake pedal for an hour or two each day.

Now, people in local, state and federal governments are showing a little more interest in alternative forms of transportation. Maybe it's just a public-sector fad, or maybe some of them are serious about making changes. I'll believe it when I see it. Nevertheless, bike commuters should speak up whenever they think someone will listen, and folks in Anchorage municipal government are asking for our input.

The city is preparing to start work on the Anchorage Bicycle Plan, which is the second part of the Non-Motorized Transportation Plan and designed to improve bike routes throughout the city. A couple of public workshops have been scheduled so that bike commuters can tell city staffers where we ride, where we want to ride and where we see problems with bike commuting in Anchorage.

If you ride to work in Anchorage, make plans to attend one of the sessions. Tell 'em what works, what doesn't, and what you'd like to see in the future.

For more info, check out the website, or e-mail the program coordinator, Lori Schanche.

It's time to speak up, folks.

(Note: Post was updated 10/16 to include workshop at Title Wave, thanks to the comment from Rose.)
Posted by Tim at 8:58 PM

they added Tuesday, the 23rd from 6 - 9 pm at Title Wave Books for those who work office hours & can't make the earlier times...
And just the other day I rode on the new bike lanes that are now striped on Abbott Loop. - sigh - the little things sure make me happy...
rose

Thanks for the info. Their website is completely devoid of any useful information.

I went to their open house at REI on Wednesday, taking time off work to do it. I posted five different major hazards and my commutes. Did I go too far in comparing Spenard Road in January to Scott's failed antartic expedition? The boys need to keep SOMETHING plowed and stop using the sidewalks and right side of the roads as snow dumps. By mid winter there's noplace to ride at pinch points between Spenard and downtown but the soft ski trails or the middle of the lane blocking 45 mph traffic on Minnesota or "C" street.