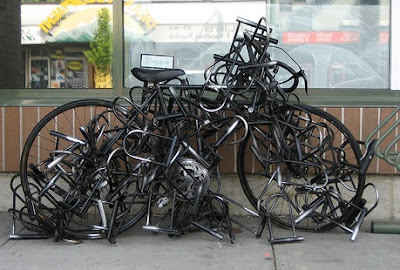 I never thought I'd have a reason post anything about the mayor of Ogden, Utah. I've always considered the metropolis around Salt Lake City to be a hellhole full of bad beer and too many Mormons (is that redundant?)—just a place to drive through between the airport and Moab.

But when little politician opens a can of whoopass on a bike thief, that's pretty damned cool. When I first read the story, I thought to myself, "I'd like to buy that little dude a beer. Just not in Utah."

Then another thought occurred to me. What kind of butthead would exile something as important as a bicycle to a backyard shed?
Posted by Tim at 10:00 PM

Hey, that's a picture of my bike - apparently right before it got stolen! A witness said 32 guys with paper mate pens opened up the locks and piled onto the bike. That was 16 more headlocks than the witness could handle at one time, so the bandits got away. I miss that bike.