Ever since I built my Pugsley last March, I've had to deal with the hassles of transporting the thing. Because of its wide fork and super-fat tires, my only options were 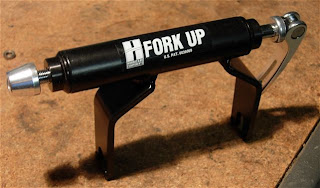 to put it on the hitch-mount rack—which usually isn't on my 4Runner—or stuff it inside. And stuffing it inside means lowering the rear seats and letting snow melt in the back of my rig.

I knew about the Fork Up adapter but, as far as I was concerned, the folks at Hurricane Components forked up when they welded two metal tabs to a tube, shoved a cheap QR skewer through it, and set the price at $60. I mean, come on. I'm a bike junkie and I'll happily spend money on stuff that would make a civilian's eyes roll, but sixty bucks? If you're going to try that, you'd better buy me dinner and drinks first.

Then last weekend, some nice Pugsley owner in Nebraska put a note on MTBR's Alaska Forum to let everyone know that Jenson USA had the Pugsley-specific Fork Up on sale for $20. I couldn't type in my credit card number fast enough.

The box was waiting for me when I got home tonight after a game of bike polo and a couple of beers at Speedway. The Pugs is movin' on up. Right up to the roof. All I need now is a strap for securing the rear wheel to the gutter of my roof rack and ... let's see, what was that other thing?

Email ThisBlogThis!Share to TwitterShare to FacebookShare to Pinterest
Labels: Fork Up, Pugsley

You paid how much? Oh that makes me sick!

Sorry, Manny. You just bought one like, what, a month ago?

This deal was so good, I was tempted to order two or three so I could sell the extras.

They originally wanted $60 for that? Get the fork outta here!