I'll show you mine if you show me yours

A few days ago, my friend Leonard posted a “roll call” on MTBR’s Alaska Forum. Ever 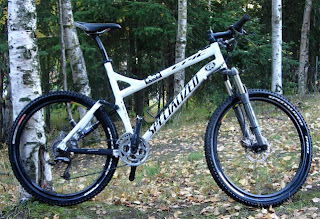 yone was supposed to respond by giving their real name, listing the bikes they own, and telling anything they want to share about why they ride, how they started, etc.

As I was looking over some of the responses, it occurred to me that bicyclists really enjoy shooting—and showing off—pictures of their bikes. Manny photographed all the bikes in his garage; Adam posted a pic of his Surly Cross Check; and The Grill Meister used a shot of his Giant NRS. The only reason I didn’t put up a picture was that I’ve nev 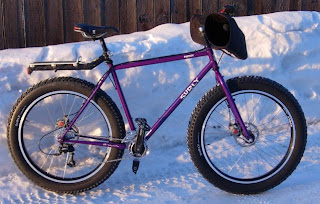 er taken a group shot of all four of my bikes together, and I couldn’t decide which one to show.

All I know is, if two bike riders are swapping e-mails and one asks the other w 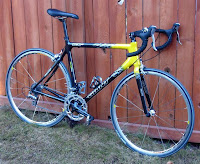 hat one of his bikes looks like, there’s a good chance that a digital picture will blast back at him like a ricocheting bullet. And the person who receives said photo goodness will ogle the other person’s bike, even if he already has his own harem of rides that give him all the satisfaction he can handle.

I just want to be left alone now. I’m going to go look at Adam’s Cross Check again.
Posted by Tim at 8:05 PM

Please post more pictures of the nipples on your Large Marge. Ideas for poses could be by the lake, in the garage, fireside, different angles, etc.

Just because it's for you, Jeff, I'll see what I can do. I don't know, though. When they get really cold ...

But, I guess it's better than people dragging out the baby albums...
rose

I've got it especially bad. Professional photographer AND I ride bikes. I've got the most photographed bikes on the planet. Good to know people who don't think it's strange :)