As much as I hate riding near ATVs during summer, I'm learning to like them in winter. I really wish a few more had passed over the Eklutna Lake trail before a bunch of us rode there today. They might make noise and stink up the 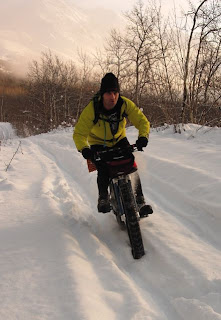 air, but those fat-tired buggers also pack snow, and that's a valuable service for winter cyclists.

Still, I learned a few things. First, my new Camelback HAWG carries a ton o' stuff—too bad we couldn't make it to the cabin so I could have made use of the camp stove and fuel I was carrying. I could have used some carbs in a tasty, hot dish.

Second, the price of carelessly releasing air from an Endomorph in a desperate search for better traction in new snow can be high. Riding on an almost-flat rear tire is like riding in loose sand. And that sucks. 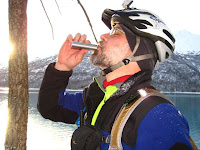 ay through 12 miles of frustrating powder is enough to confirm that I have no interest in ever doing the Susitna 100, despite being tempted in the past. I didn't blow two large on a Pugsley so that I could walk beside the damned thing. I like the Pugsley for the terrain I can ride with it, not for the shit I can push it through.

And fourth, plowing through snow in the mountains with friends is still more fun that sitting at a desk. To paraphrase that old bumper sticker about fishing: The worst day riding is better than the best day working.

(Thanks for the flattering pic of me
slurping Leonard's hooch, Bubba!)
Posted by Tim at 9:04 PM

"The worst day riding is better than the best day working" Amen to that Brother!

I call pushing the bike through powder "man hauling," because it reminds me of Scott & crew in Antartica.