The headline in Saturday's Daily Snooze was bleak: "Winter recreation around town all but rained out" 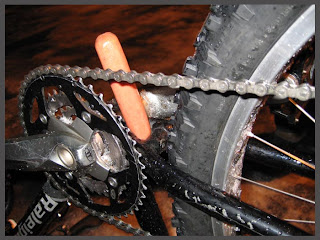 n, we got creamed last week with rain and warm winds that turned most of Anchorage into a depressing, slushy mess. By the time the weekend rolled around, I was wallowing in the funk and believing what I read in what's left of our local newspaper.

Fortunately, afternoon reports from the Frigid Bits "Loogie Boogie Woogie Foogie Or Whatever The Hell It Was Called" course sounded promising enough to get me off my ass. I loaded the rig with a studded-tire bike and a cooler full of beer and took off. And what a good move that was.

The singletrack was crusty and firm, the beer was cold, the burn barrel was hot and the company was great. I had almost forgotten how good it feels to stand around a fire drinking beer in the cold air. (I said almost.)

So what if I pedaled up ahead of the non-racing group only to realize—as I got ready to set up for some pics—that I had forgotten my camera? I got to ride with some new people. I got to watch Manny's singlespeed soar through the air when he chucked it into the woods after multiple chain derailments. And then I got to drink beer.

I didn't need the camera anyway. I'd never have been able to top Manny's shot of SkiMonkee's frozen weiner.

Winter recreation rained out? Only if you're one of those people who can't get beyond thinking that winter recreation means skis, skates or snowmachines. And that's narrow thinking.

I was quite impressed at Manny's throwing technique. I wonder if he'll share his secret.

I thought you just had "technical difficulties" with your camera. Oh that's right, that's code for "damn it I forgot it in the car".

Well, technically it never got as far as my car. I found it on the bookshelf in the living room.