Sometimes in the building where I work, I run into people with whom I am only slightly acquainted, and they try to make small talk like normal, functional adults. Anyo 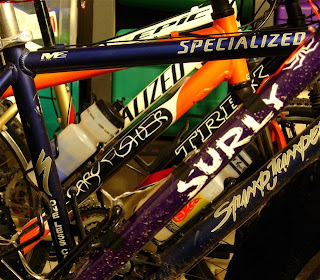 ne who has ever attempted to chat with me for more than two minutes has figured out that I am saddled with a socially crippling addiction, so some of them just save time and take the shortcut.

This happened yesterday when a guy said, "How ya doin'? Still ridin' that bike?"

Most people—even incurable bike junkies—have the social acumen to simply reply with something like, "Yup. Sure am. How have you been?" But not me.

Now, I'm fully aware the guy really didn't give two shits whether I've been riding or not, but for a few milliseconds my brain raced through the conversational options.

Was he referring to my usual habit of bike commuting? I haven't been riding to work much lately, which is a source of frustration and uneasiness. Should I lapse into a defensive mode and start explaining myself to a guy who drives every day?

Or should I fixate on the singular nature of his inquiry? What did he mean by "that bike?" Perhaps I should lapse into full bike-dork mode and say ...

"That bike? What do you mean that bike?

"Damn it, man, which freaking one are you talking about?!"

That would certainly be one way to discourage idle chatter in the men's room.
Posted by Tim at 7:32 PM

Email ThisBlogThis!Share to TwitterShare to FacebookShare to Pinterest
Labels: bikes

Sometimes the other guys in the office will talk about their boring hobbies, and I wonder if I sound the same to them when I talk about cycling. I'm probably worrying too much. They're probably fascinated!

If they're not, they're a bunch of golf-playing, football-watching losers!

At least you didn't have me kicking the wall as the Red Sox marched to the World Series.

I hear the exact same comment at least once a week, especially in the winter. "You still riding your bike to work?" they ask and my answer is always, "Yeah, doesn't everybody?

FYI: I rode to work on Tuesday and on the ride home there was one, all-too-small stretch -- an old road that had been closed by the nearby freeway's expansion -- that was reminiscent of the Campbell Creek trail. Dark...but enough ambient light to be comfortable. Quiet...surprising, given the I-5 freeway a short distance away (the stretch was behind a small hill/cliff that blocked the road noise). Wildlife...coyotes howling in the marsh beside the road and a huge owl that launched from a tree and flew alongside for a few wing beats before veering off. Sadly, I emerged back into the NOISE! of the SoCal freeway society after about half a mile. But for that brief interlude...

An added bonus: the time to ride home was exactly the same as it would have taken me in my car, sitting in traffic as is par for the course for the evening commute. How 'bout THEM apples?