One of my brothers has been e-mailing me pictures from his family's spring-break mountain biking trip. It'll be awhile before I ride any real dirt singletrack, and I've been feeling envious. So today I took a little trip to Moab without bothering to get on a plane. 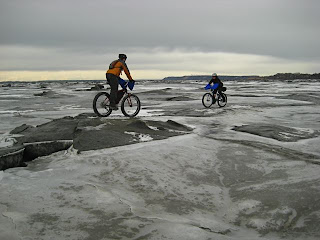 The mud flats change from week to week. Every time I ride them this time of year, I tell myself it's the last time for the season. 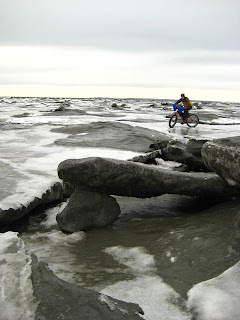 Then I go back. And the conditions are different every time. 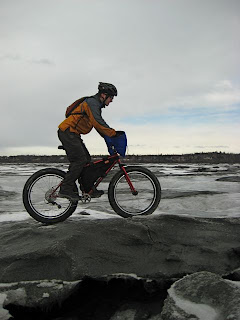 Last week's ice mushrooms have mostly melted away, leaving big sections of exposed mud. Other sections are covered with a thin layer of ice that looks treacherous for anything but studded tires. 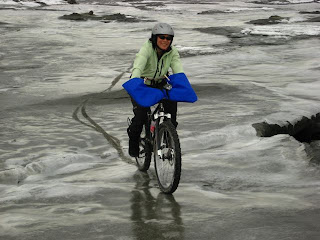 But with mild temperatures—and high salt levels in the tidal-zone ice—the ice is now shallow and soft. It's just waiting for Endomorphs to mash in into the thawing mud for good traction. 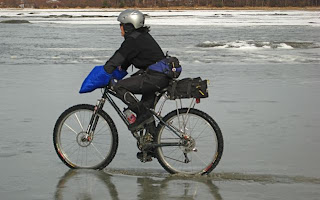 In other areas, the mud is covered with an inch or two of water, but firm enough for easy cruising. This is the kind of stuff Pugsleys eat for lunch. I've been riding the coast off and on for several years, and today's conditions were among the weirdest (and funnest) I've ever seen.

Any day now, this area will be impassable and I'll stop raving about it on the blog every week. Until then, I'm gonna keep lovin' it.

Email ThisBlogThis!Share to TwitterShare to FacebookShare to Pinterest
Labels: coast

Wow, a whole different world of cycling. Are those gigantic blue thingies gloves?

Nope, those are pogies. They're handlebar covers that add a layer of insulation over your gloves. A real nice thing to have when it gets really cold.