My wife and I were living in an apartment years ago when a new couple moved in next door. After a few days, she noticed a mountain bike hanging on the upstairs balcony and mentioned it to me. She thought maybe t 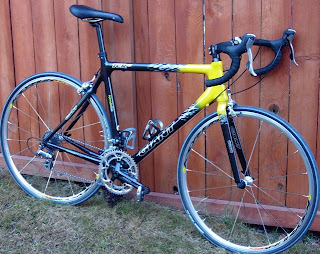 he new guy could become one of my riding partners.

After she threw me one of those looks that said “nice attitude, jackass,” I explained that it was obvious the guy wasn’t serious about mountain biking, and I had no interest in spending an afternoon waiting for him to carry broken parts back to a trailhead

Yes, boys and girls, even I—a caring, sensitive and supportive guy—have been accused of being a bike snob.

As hard as it may be to believe, I could be a little guilty of the charge. But even I have limits.

One of my co-workers is shopping for her first new road bike, and has asked several times for my opinion on various models and brands. As I always do in such situations, I’ve encouraged her to buy as much bike as she can afford, and to feel confident that she’ll get a solid machine if she buys from a good shop and sticks with mainstream manufacturers such as Specialized, Trek, Giant, Orbea, etc.

But she has another friend who is telling her that he would never ride such inferior bicycles, and that she should double her bike-buying budget to $5,000 or more so she can buy some blinged-out boutique brand.

For most people fairly new to cycling, simply spending two or three grand on a bike is intimidating enough. The last thing they need is some arrogant dude with too much disposable income trying to impose his egomaniacal hang-ups on them.

If you can afford to spend big bucks on a top-end bike, good for you. Hell, if I were rich, I’d have a garage full state-of-the-art machines. But keep in mind, most of us live in the real world, where $2,400 will buy my co-worker a beautiful road bike that is mind-blowingly fun to ride.

How many times have you caught and blown past an obvious novice on a hill who was way out of their depth on a fully speched top-end bike?

It usually brings on a wry smile and I remember what somebody who knew a thing or two about cycling once said, "It's not about the bike."

In this arena, bikes can go either way. They can be an incredible bargain; as you say, it is possible to get an amazing bike for under $3000 (or even under $1000, depending on what you need and how savvy you are about it). The sheer value is impressive, when compared to other consumer goods (computers, video games, stereo systems). On the other hand, if your goal is to show off just how much you can spend and feel superior to the peons on name brand bikes, the sky is truly the limit. I'm sure that Sam Wittingham would be happy to accept a down payment on another $15,000 single speed. But which coffee shop would be best to ride it to? Val

I ride a $1000 Cannondale road/hybrid/touring bike. It has around 12000 miles on it and I love it. It has been camping, on short tpours, shopping, and around town. It suits me fine.

It's amazing just how good road bikes are at the $1200 to $2400 level. Will a $5000 bike ride twice as well as a bike at half the cost? Hell no! Most $2400 bikes will weigh within a pound of the uber bikes and give a ride that is just as fast, nimble, and comfortable. With the $2600 saved one can get themselves a pretty nice pugsley and have money leftover for a fair amount of good beer, too!

Did I just describe you, Tim?

Back in the day, I can remember all the cool bikes the "cool guys" were riding back when I was serious into road racing. I couldn't afford a nice racing bike, so I bought my brothers 1973 Fuji Ace back in 1977 and raced it for about 10 years. The olny upgrades I ever did where new tires once a year.

I would constantly get teased about my "old equipment". I always heard, "You need better gearing". "You should get some new wheels". The best part though, was telling them that it all seems to be working fine after kicking their butts up one side of the street and down the other.

Was it?...I think it was Eddy Merckx who said "Don't buy upgrades - ride up grades." Val

Great words I'm going to copy and use any time asks me for bike buying advice. I've had the most fun on my 20 dollar Fuji/Salvation Army Frame and about $ 100 in rebuild stuff (to a fixed gear).

The bike snobs ruin it for every one - the one good thing is they help out the LBS!

My Surly LHT rides the sweetest of any bike I've owned...especially when loaded down with some panniers.

I'll admit I'm not the best cyclist in the world, but I'm a bike commuter who rides about every day even though I weigh more than 300 pounds and have asthma.

Anyway, several years ago I was a reporter covering the now-defunct Iditasport Extreme race and I decided to toss my beater Shogun mountain bike in the back of my Bronco when I went to watch the start of the race in Knik, just in case I found an opportunity to get a ride in. There were all these foreign bikers competing in the race, some with all the techno-wienie gear and their own video crews, and I'm there with a free hand-me-down bike (a gift from a co-worker after my Cannondale was stolen) and I'm wearing Dockers and carrying a backpack full of camera gear.

Anyway, the race starts and the format of the race was the bikers would go out about 20 miles to the Big Susitna River, then set up camp for the night so race officials could make sure they all knew how to camp in the Alaska wilderness during the winter. Since the race lasted a couple of days and more than 300 miles to McGrath, it's a good safety check.

After getting some start photos, I dug my bike out of the Bronco and started following the bikers to the overnight spot. Local trail knowledge is a good thing, especially when you know some shortcuts, and somehow I got ahead of a couple of Italians and Spaniards in the race. I'm cruising along, drinking a can of Diet Coke from my backpack on a 40-pound beater bike, and these guys are flabbergasted that I beat them to the overnight camp. They wound up scratching, even though they had their own video crew traveling with them on a snowmachine. Dang, cheechakos.

Knowing your conditions can mean a lot more than having the expensive bike.