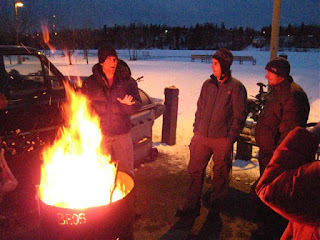 It appeared to be done for the season
a week or so ago, but the not-quite-famous
Frigid Bits Burn Barrel came out for an encore
Saturday night at Westchester Lagoon.

Now it is officially done for the season. 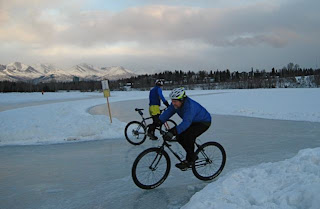 We did a casual, 10-lap race on the
lagoon's freshly hot-mopped skating course. 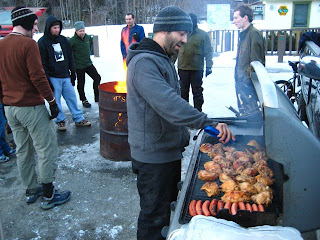 Then we scarfed down dead critters, courtesy of Manny. 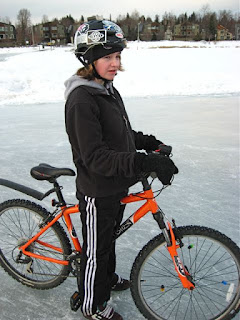 My cool daughter joined us,
winning first, second and third place
in the women's division. 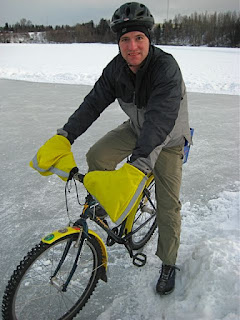 DaveIT—one of four riders
in the very first Frigid Bits race, and
a regular throughout the first season—
returned after a long absence
and raced on the beer hauler
he built with a salvaged Dumpster frame. 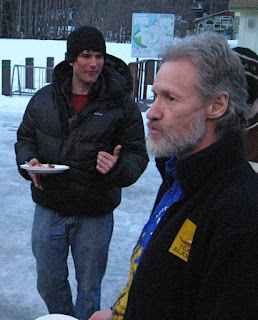 A little more than 24 hours after
flying back from Nome following his
19-day victory in the Iditarod Trail Invitational,
Pete B. (left) stopped by
for some well-deserved calories.

He also got to say hi to his
fellow soon-to-be-expatriate Alaskan,
The Grillmeister (right).

The Anchorage bike scene
is gonna miss those guys.
Posted by Tim at 9:44 PM