I think zip ties and duct tape may be the ultimate tool combination. One or the other will often get the job done, but combine them, and you can really kick a little ass. Whatever situation you're in, if you c 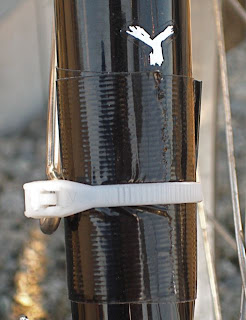 an't accomplish at least a temporary repair with both of them, you're probably in big trouble.

I've used zip ties to attach all sorts of things to my bikes, but I really love the utilitarian beauty of mounting a pair of fenders to my commuter bike with a bunch of sticky tape and plastic.

That's part of the beauty of old bikes: You don't have to care what they look like, so you can rig up whatever works. (Yeah, yeah. I know some of you take this approach even with new bikes, but I prefer to maintain at least a modicum of aesthetic appeal for a few years, especially on an expensive bike.)

My old Stumpjumper was my last big purchase before leaving New Mexico for Alaska back in 1996. It's down to being my commuter these days, but I still love the old thing. The M2 frame is bomb-proof. It has survived more crashes than I can count, not to mention a roof-rack collision with the entrance to my garage. Other than the frame, the only original part left of this bike is the stem. Everything else has been replaced at least two or three times, and 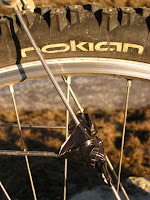 after going through a couple of Rock Shox forks, I took it rigid with a Surly Instigator fork that has no seals to blow out when I'm riding to work at -15F.

In '96, the Stumpjumper M2 was an off-the-shelf XC race bike with no braze-ons, so mounting full-coverage fenders requires a bit of ingenuity. I wrap some black duct tape around the parts of the frame where I need to attach fender supports, then zip-tie on the metal supports. The tape helps keep the ties from slipping, and protects the frame from nasty scratches.

The supports that come off the back of the fender don't reach any part of the frame when the fender is pushed out far enough to make room for studded tires, so I zip 'em to the middle of another pair of supports and then tape 'em up like a nerd's broken glasses so they can't slip downward.

Badda bing badda boom, I've got a commuter that looks funky, practical, cool and dry all at the same time.
Posted by Tim at 7:47 PM

Ah, so I'm not the only one to attempt to protect the paint with electrical tape! For strapping items to the frame I like Velcro(tm) brand hook-and-loop tape, especially the kind where you can join different strips together to create a longer strip. It's especially useful for slinging a Thermos(tm) under the top tube.