Cameras on the trail

This image of my friend Adam shooting pictures last weekend got me thinking about how digital cameras have evolved into one of the most popular items carried on mountain bike rides. I’d rank mine right behind wat 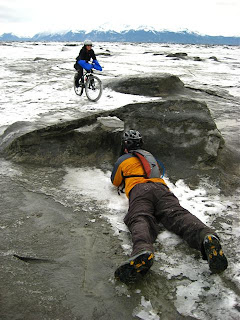 It didn’t used to be this way. Ten years ago, virtually none of my riding partners carried cameras, and I did so only occasionally. Good SLRs were (and still are) so heavy that carrying them was a pain in the ass, and so expensive that the idea of destroying one in a crash was worse than the thought of getting hurt. Point-and-shoot film cameras weren’t much lighter, and the quality of images they produced could be pretty marginal.

Today I carry a camera about the same size as a deck of cards. Its 2GB memory card isn’t much bigger than a corn flake, but holds something like 600 or 700 high-resolution images. I bought the whole damn setup for $200, which is less than I used to pay for enough film, processing and printing to get 600 snapshots.

Although it doesn’t allow me the full manual control of a digital SLR, my digital point-and-shoot gives me an amazing number of microchip-assisted frills that no film camera ever could. And it’s so light that I can attach it to the chest strap of a Camelbak and forget it’s there.

And maybe best of all, it’s cheap enough that if I smash it to pieces in a crash, I'll be a little bummed out, but I won’t lose any sleep over it. Every year, these little cameras get better and cheaper.

I wish we could say the same thing about suspension systems.
Posted by Tim at 8:35 PM

Email ThisBlogThis!Share to TwitterShare to FacebookShare to Pinterest
Labels: cameras

My camera goes on every ride. I think I'd be in a panic if I forgot it!

I remember a few years ago blogging about how the camera has replaced the cell phone as the most irritating electronic devise on a ride.

Never leave the house without mine.

I just picked up a little digital camera and it is small and light enough I sometimes forget I have it with me. Quite a difference from my SLR gear which just might weigh more than my road bike.

for someone who still uses a 35mm, any suggestions, most bang for your buck? just something small, uncomplicated, easy to use and good quality??
let me know, thx, geo

You want advice on buying a small film camera?

Here's my advice: Don't. It's a bad investment.

You'll get better pictures, and save enough on processing and printing that the camera will quickly pay for itself.

Film is dead. There's no going back.

tim, i ment a digital camera. opps, wasn't clear on that doooooh.

Most major brands will be OK, but I recommend Nikon and Canon. I have a 3-year-old Nikon Coolpix 5200 that has endured an unreasonable amount of abuse and still works as well as the day it came out of the box.

I recently bought a Canon SD1000, which has a great array of nice features and takes good pics. It was only $200 through Costco.com, including a 2GB memory card. I think they've since knocked another $20 off that price.

I always carry a spare battery, and Canon charges $50 for theirs. I bought a third-party brand online for $20 and it works great -- it even has a little more power than the Canon battery.

You can buy a hell of a nice digital point-and-shoot for $200. A little less money will still get you a fairly decent one, but at that price, why skimp?