Back from the 2008 Fireweed

Despite having this tongue-wagging* lardass cross the finish line on its behalf, Team Uranus Titans finished Saturday's Fireweed 200 in 10 hours, 14 minutes, 12 seconds. That was good 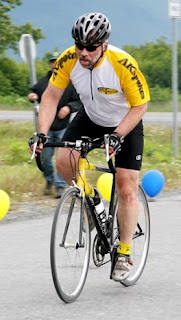 enough for 8th place among 37 teams in the 4-person mixed relay division—not a bad result for a squad that would have been happy with middle of the pack.

A couple of team members suggested that maybe our strong performance was a sign that we should get serious enough to actually train, read the rules, and all that stuff for next year's race.

From the decent weather, to the beautiful scenery, to the mutant squirrel, to the vicious headwinds, to Ken's 54-mph descent of Thompson Pass, to all the laughs and sweat along the way, it was a great race. So thanks to Heather, Ken, Brian, and our wonderful support drivers, Julie and Ken Sr. (And a special thanks to Heather for traveling 200 miles with me and not flipping me off even once ... that I'm aware of.)

Officially, the whole thing ended Saturday evening in Valdez. But really, it'll end over the next few days when we all empty our cars and figure out who has each other's stuff.

* My wife was kind enough to remember that, in his prime, Michael Jordan often made a similar face while driving the lane and launching into the air for a great slam dunk.
Posted by Tim at 10:12 PM

I saw that photo on the ADV website and thought that might be you. I didn't realize you were willing to suffer that much on a road bike.

It was my first time at Fireweed and I did the 200 solo. It was extremely difficult, but was the most fun I've ever had at a bike race. This morning over breakfast, I was already discussing plans for next year with my wife.

It must be an illness we have; this obsession with all things bike.

Here's my blog about the race:

I haven't finished my race report, but will get it posted soon.