One bike? Get real! 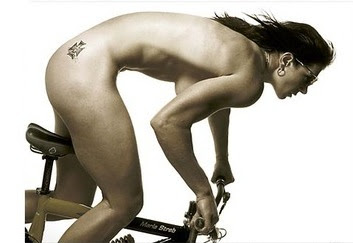 Could YOU keep up with Marla?
Dream on.
I rarely pay any attention when another blogger “tags” me, because most of those chain-mail type things are a boring waste of time. You really don’t want to know my favorite color or the five things about myself that I’ve never told you. And I don’t want to write about those things. This blog isn’t some desperate form of self-therapy, no matter how many of you suspect I might need such a thing. It’s about bikes. All bikes, all the time, no apologies.

But Julie tagged me with a questionnaire about bikes, so it didn’t suck. I decided to give it a go. I might even provide a couple of sincere answers. Or not. It’s anybody’s guess.

If you could have any one — and only one — bike in the world, what would it be?
This is like asking which of my children I love the most. It's just wrong. But if I really had to make such a choice, I’d probably have to go for my Surly Pugsley, with extra wheelsets for studs, commuter slicks and knobbies, and a suspension fork for summer trail rides. If I lived anywhere but Alaska, I’d just go for a nice full-suspension mountain bike with full lock-outs and a set of commuter wheels.

If you had to choose one — and only one — bike route to do every day for the rest of your life, what would it be, and why?
A little-known stash of singletrack near my old place in the village of Nambe, New Mexico. It had the ideal combination of flow, exposure, technical challenges, and scenery. I rode it for years and learned new things each summer. And it’s still the only trail I’ve ever ridden with a corkscrew section that merited the nickname of “The Spiral Staircase.”

Best of all, I virtually always had the whole trail to myself. In fact, I'm probably the only person who knew the name of The Spiral Staircase, because I made it up. It took me two years and several patches of skin to figure out how to ride it.

What kind of sick person would force another person to ride one and only one bike for the rest of her / his life?
A modern-day Marquis de Sade. I'd say such a person needs an ass kickin' but he'd probably enjoy it.

Have you ever ridden a recumbent? If so, why?
Yes, for a few laps around a parking lot. Why? Because a dealer was offering free demo rides and I wanted to see if I could actually get moving from a dead stop with pedals that were directly in front of me, and whether I could steer with a handlebar that was under my butt and mounted backward. It wasn't all that hard, but maybe that's because my ass has spent so much time flying over handlebars.

Recumbents are dorky, but if I had to choose between riding one or not riding at all, I’d cut two eye holes in a paper bag, and pedal on down the road.

Have you ever raced a triathlon? If so, have you also ever tried strangling yourself with dental floss?
Why in the bloody hell would I want to screw up a perfectly good bike ride with all that running and swimming shit?

As for dental floss, I fear that it would likely decapitate me prior to strangulation, and I hate the idea of still being conscious when my head hits the ground with my eyes looking back at my headless body while blood gushes from the gaping maw where my neck used to be attached. How could I yell, “OH, SHIT” while lacking a direct connection to my lungs?

Suppose you were forced to either give up ice cream or bicycles for the rest of your life. Which would you give up, and why?
I rarely eat, or even think about, ice cream. I think about bikes more than most men think about sex. Come to think of it, that might not be a healthy sign.

Could I please have two scoops of mint chocolate?

What is a question you think this questionnaire should have asked, but has not? Also, answer it.
My question: Which celebrity, living or dead, would you most like to draft in a paceline?
Answer: Marla Streb would drop me off the back, so I'll stick with Marisa Tomei. Alive. Long live Marisa Tomei.

Hmm. I wonder if my wife ever reads this blog.

You’re riding your bike in the wilderness (if you’re a roadie, you’re on a road, but otherwise the surroundings are quite wilderness-like) and you see a bear. The bear sees you. What do you do?
Well, hopefully I’d be riding with the dumbass who came up with the question about one bike for the rest of my life, so that I could quickly kick his knee from the side, tearing loose his tendons and leaving him writhing on the ground as I slowly back up and calmly say, “Good bear. Good boy. I’ll leave you two alone now.”

Email ThisBlogThis!Share to TwitterShare to FacebookShare to Pinterest
Labels: tagged

well, Tim it seems your a popular man because I tagged you as well

Why is it that there are so few photos of the athletic female form. This is a great shot of how powerful a naked woman's form can be and while it's beautiful, it's not sexual. Thanks for posting it!

Oh, I should check and see if you wrote anything to go along with the picture...

You wouldn't say that if you were drafting her wheeldancer!

So let me get this straight...I'm supposed to answer the same questions you did, and keep up the momentum on the hilarity and fine graphics? Man, you are the task master!

Hey, where is this trail in New Mexico? I live in Ridoso NM.