Let it all hang out 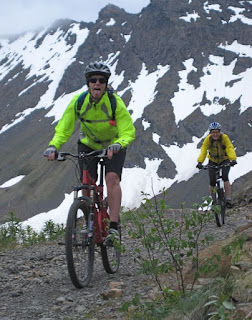 to become a trendsetter and make tongue wagging fashionable in the sport of bicycling.

All it took, of course, was a well-timed tongue flash at the Fireweed finish line, and BAM, a new fad was born. This could be right up there with the pet rock, the Rubik's cube, or asking "Where's the beef?" Come to think of it, there have probably been a couple of fads since then, but I'm old and I've forgotten what they were.

Heather's gettin' on the bandwagon and adopting the tongue wag. Oh, sure, she may have thought she was just mocking me during a ride on Powerline, but she really wanted to Be Like Mike ... and Tim.

I bet you get about a million hits with those two labels!