You’re looking at one certifiable bad-ass of a senior citizen. 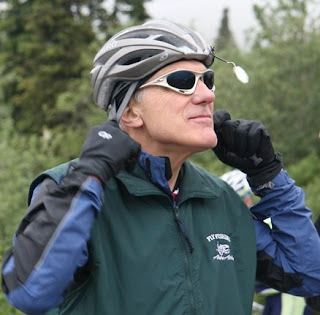 ourselves on the back for riding reasonably well in the shorter, easier Fireweed races last weekend, Lew Meyer was finishing the 400-mile solo race—which is gaining a reputation as one of the more grueling endurance road races in the world—in a little more than 29 hours.

His support crew included his grandson.

Unlike most of the younger competitors in his event, Meyer had the energy to show up at the awards ceremony in Anchorage on Monday night. When he walked up front to collect his coffee-mug trophy, the applause grew into the night’s only standing ovation—a well-deserved one.

Fifteen racers signed up for the 400-mile race, and this guy was one of only five who finished. I'd say he kicked some ass.

(Updated to reflect number of entrants.)
Posted by Tim at 10:03 PM

14 riders signed up for the Solo and only 5 completed it.

Thanks for the tip, anonymous. According to the Fireweed site, 15 people entered the 400 solo, which makes his finish even more impressive.

Great blog!! Someday I hope to visit Alaska and ride a bike. I'm looking forward to that day! In the meantime I'll keep reading your blog. Thanks!