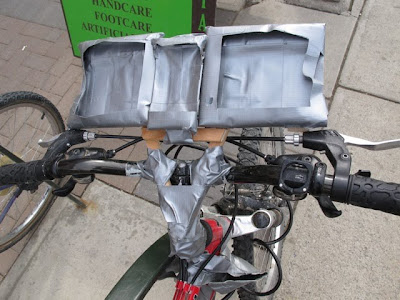 Spotted today in downtown Whitehorse, Yukon.
Bicycles & Icicles is on the road for a little while. Last week was devoted to loading gear, gettin’ the house sitter safely ensconced in our abode with a big load of ammunition and dog food, and then gettin’ the hell outta Dodge.

Keep an eye on the blog for photos and updates over the next couple of weeks. For the first installment, we have photographic proof that, if you’re crafty enough, damn near anything you need can be fashioned from a roll of duct tape.

Where else but the Yukon will you find a duct-tape handlebar mount for an iPod and speakers?

The Yukon rocks.
Posted by Tim at 8:17 PM No comments:

Email ThisBlogThis!Share to TwitterShare to FacebookShare to Pinterest
Labels: Whitehorse

Like most people, I love a harmless fantasy now and then. A little daydream can provide much of the pleasure without any of the risk, devastation and pain. I often stare of into space with a smile on my face this time of year as my mind conjures up a multitude of decadent pleasures. 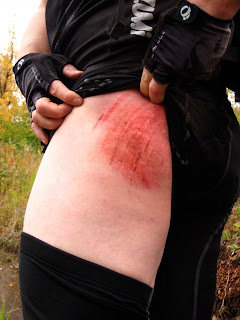 This is the period when I can imagine the ecstasy of slipping in and out of a warm, damp forest on a slinky little ribbon of singletrack while every inch of my body vibrates with excitement.

By July, of course, the fantasy will be over, as it always is. It’s the same every year—a joint aches for weeks or months after a crash. Or a thumb gets tweaked and reminds me every damn time I click up or down a gear. There always seems to be a scab healing (and itching) somewhere. Usually, the injuries are nothing major. Just nagging little things that grow a bit frustrating as the weeks go by.

After last fall’s trip to Moab and Fruita, my left elbow hurt on nearly every ride until the end of February. It’s only May, and the pain in my left hand is mostly gone, but I’ve already spent a month with two swollen fingers, and I’m just now regaining the ability to form a tight fist after taking a spill on the road bike.

Being a clumsy hack on a mountain bike means that May is about as pain-free as life is going to get. Shit’s gonna happen, and some of it’s gonna hurt.

And with a solo attempt in a 12-hour race coming up, that may be more true this year than ever before.
Posted by Tim at 6:11 PM 1 comment:

Friday is officially Bike to Work Day. Hopefully, the streets and bike paths will be busy with loads of new bike commuters. It’s the one day when you can count on seeing a wide variety of people riding to work on all manner of bikes. Personally, I hope there's a lot of smooth-running beater bikes out t 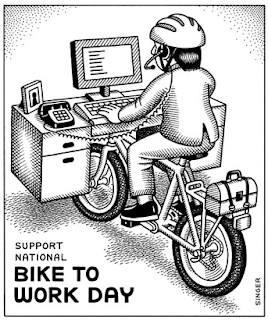 here with smiling riders on them.

I changed my approach to bike commuting several years ago after reading a post by Patrick O’Grady over at Mad Dog Media. I can’t remember all the details, but Patrick basically suggested that everyone would be better off if we chucked the lycra and fancy jerseys, and started riding to work in casual shorts and Hawaiian shirts.

Bike commuters should set a good example, he wrote, by making the ride to work look like something anyone could enjoy. Dressing up like a bunch of wannabe racers and zipping around on exotic-looking bikes only serves to make bike commuting look alien to an outsider, so we should strive to look like average people doing a normal thing.

His logic was brilliant, and I adopted his philosophy as a daily habit. The bike I ride to work is old, dirty and practical, complete with fenders. My pants are cotton cargo shorts from Cabela’s—unfashionable, but loose and comfortable enough for short rides—paired with a common T-shirt when the weather allows. I’m also fond of coasting while casually carving big, slow slalom turns, because it’s fun. And looks it.

This whole approach is a win-win for me because, frankly, I’d look pretty stupid all gussied up in lycra shorts while pedaling a muddy old bike with fenders, slicks and a rack trunk. But I also like thinking that maybe—just maybe—a few drivers will see enough casual schlubs like me riding to work and one day think to themselves, “Hell, I could do that. ... Hmm.”

Have a great Bike to Work Day. I hope you’ll make it a casual Friday.
Posted by Tim at 10:03 PM 7 comments: 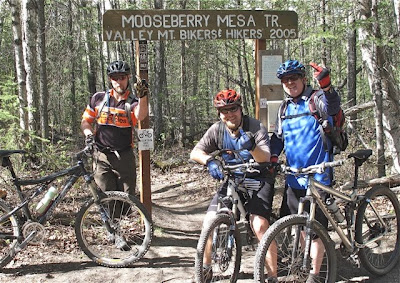 It’s always a good thing to run into EndoRando on the trail. It’s also good to run into him in a trailhead parking lot and hear him announce that he just shot a new Finger Photo.

Rando and a couple of his buddies were out soaking up Palmer’s powder-dry singletrack last Saturday when they created this fine piece of work at the entrance to Mooseberry Mesa. 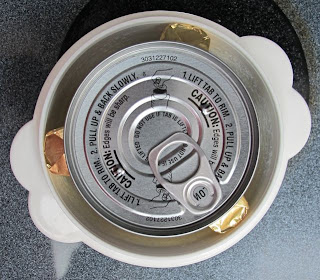 In recognition of Bike to Work Week, I’d like to offer helpful information: Hershey’s Special Dark Nuggets with almonds can be used as stabilizers to prevent shifting of cargo in transit, if you happen to be carrying a can of Progresso soup in an old Tupperware bowl.

You just can’t make this shit up. 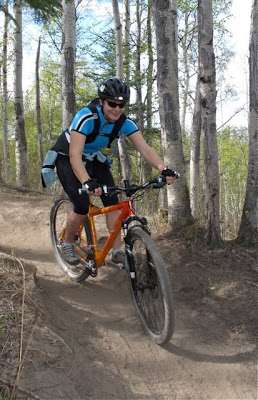 The myth is busted. For several years, I’ve scoffed at friends who said positive things about the riding at Kepler-Bradley State Park in Palmer. I’d tried it twice and found little more than voracious mosquitoes and wide, boring trails. I refused to believe 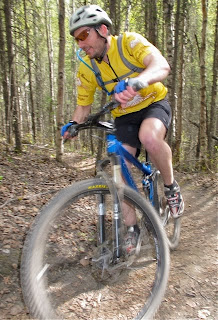 the stories were true.

That changed on Saturday when I drove north with Jules and the Monkee after staying up until 1 a.m. the previous night as we built her new Salsa Dos Niner. They knew where the good stuff is, and damn, it was fun.

Finding dry Alaska singletrack in May is about as easy as finding a virgin in Vegas, so to get my mountain bike dirty a full two weeks early was sweet. And those nasty mosquitoes weren’t out yet.

EndoRando was in the parking lot after wrapping up his ride, which included the shooting of a fabulous new piece of fine art for the Fabulous Finger Gallery. I hooked him up with some stickers for his fat bikes, and his pic will show up on the blog later this week, so stay tuned, boys and girls, 'cause it’s dirt season!
Posted by Tim at 10:22 PM 3 comments:

I have no idea what the guy said. The headwind was roaring in my ears, and my light jacket was flapping like a flag in a hurricane when I passed him on the C Street bike path.

He was spinning a small gear into the maw of Monday night’s wind tunnel, and I caught up to him only because I was mashing the shit out of my 36x16 and wondering what had ever possessed me to turn my commuter bike into a singlespeed.

We smiled at one another and I yelled something like, “This is insane!” He probably couldn’t hear me, despite us being only three feet apart. He smiled and yelled something back, so I nodded as if I understood, then kept inching ahead, slowly.

After getting home, I posted a comment about the headwind on Facebook, prompting my old friend Helen to reply: “There are things for situations like this. They're called cars.” In the ensuing exchange of comments, she pointed out that drivers can communicate easily in all situations—with their middle fingers.

I suddenly felt much better about fighting that bugger of a headwind, because Helen had reminded me of one of the greatest things about riding a bike.

When motorists are stuck in rush-hour gridlock, tempers flare and everyone gets angry. But when bike commuters find themselves in adverse conditions, they support each other with friendly waves and knowing smiles. Their shared suffering creates an unspoken bond.

Try finding something that cool the next time you’re on a freeway.
Posted by Tim at 6:00 PM 4 comments:

The blog has been slow for the past week. Hell, it’s been in a coma. It’s not that bike things aren’t happening, they just haven’t been blog-friendly. It’s road-riding season while we wait for 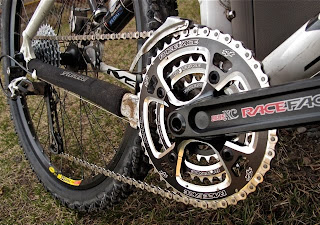 the trails to dry, and pavement’s just not the same.

On dirt, riders scatter enough for me to get photos. On pavement, they tend to stay in tighter groups.

On dirt, riders get to laugh at each other’s falls. On pavement, falls always hurt, and laughing can get your ass kicked.

On dirt, you tend to swap stories when everyone stops to regroup. People talk about how they cleaned a boulder or slipped on a wet root. On the road, there’s not that much to talk about. “Did you pedal for the past half-hour? Hmm. Yeah, me too.” Fascinating stuff.

My mountain bike is spruced up and ready to go. New tires, bottom bracket, chain, cassette and crankset. It needs to be set free.

An escape is being planned. I just need to go over the wall before the guards toss my cell and discover the map.
Posted by Tim at 6:27 PM No comments:

Shut the fuck up.
Learn to buck up.
Shut the fuck up.
—“Nugget,” by Cake
Motorized vehicles tend to make little people feel larger and stronger than they really are. And I’m not just talking about those enormous pickups driven by frustrated men who are shorter than the average eighth-grader. Even a little SUV can make a soccer mom feel invincible, especially when she’s near a bicycle instead of a monster truck driven by 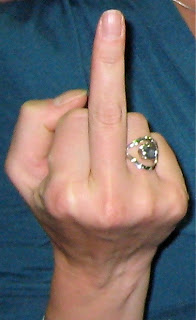 That’s why I always like watching a motorist’s gonads shrivel when his (or her) anonymity disappears as an angry bicyclist appears at his door after he parks. I’ve seen teenage boys and angry old men suddenly grow sheepish when confronted at point-blank range after they’ve harassed me on the road.

This morning, I heard the hostile voice of a woman as I pedaled north on an industrial side street: “THERE’S A BIKE PATH ON THE OTHER SIDE!” I looked back and saw a car—with the driver’s window rolled down—pulling onto a side street. Yeah, that’s ballsy. Yell at me as you’re turning off the road to disappear, you abomidable bitch.

I followed her into the parking lot where she works, rolled up to her window and asked what her problem was. “There’s a bike path right over there!” she angrily said.

No, I replied, that’s a small sidewalk on the wrong side of the road, and oh, by the way, do you know what Alaska law says about bicycles on streets?

“Look, I ride a bike too,” she said, growing timid. “I was just trying to be helpful. I get nervous when I see a bike on the street.” (There goes the right ovary.)

Well, maybe you shouldn’t be driving then, because what I was doing was safe and legal, and I really don’t appreciate people copping an attitude and yelling at me from their cars. I know what I’m doing, fuck you very much.

“Look, I just thought you should know there’s a bike path,” she replied while nervously starting to close her door and raise her window. “I thought maybe you hadn’t seen it. I didn’t have an ‘attitude’ and I didn’t mean to upset you.” (Aaaaaand there goes the left ovary.)

After I spouted a few more angry words and started to roll away, her boldness began to return as the distance between us increased.

“Have an awesome day!” she called out.