Bike riders love our gadgets. But sometimes it feels like we have too many. In recent years, I’ve stripped the handlebar-mounted computers off all my bikes that didn’t truly need for navigating long rides. I stopped tracking my annual mileage. I quickly tired of the GPS doodad I received as a gift. And I’ve never been interested in heart-rate monitors or wattage meters, which would mostly be expensive ways of measuring how much I suck. 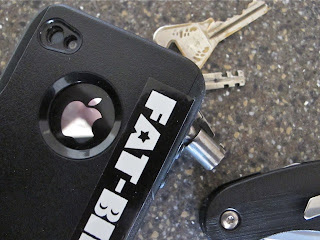 But I’ve remained addicted to carrying a cell phone. It can be valuable in the event of an emergency, and the built-in camera can be handy if I’m not carrying a real camera.

Then one night last week, I pedaled away from my house and, out of habit, patted my pocket to make sure my iPhone was onboard. It wasn’t. The memory of it on the table while I ate a sandwich made me start to turn around, but then I stopped myself.

When did cell phones become mandatory? I happily rode thousands of miles before those things became a ubiquitous piece of gear that humans take just about everywhere but the shower.

As I rolled down the street, I realized I was riding only a couple of miles to a brief appointment and there was no real need to have the phone in my pocket, so I didn’t go back for it. Blowing it off was actually sort of a thrill, and that’s kind of sad.

Simplicity is beautiful thing. And it often makes a bike ride more fun.
Posted by Tim at 7:30 PM 6 comments:

Back on the Blog

This here pimple on the ass of the Internet has been quiet while I’ve attended to more pressing matters, but it’s time to get back to business, even if it’s monkey business.

Hell, my last post about riding in Alaska involved fat bikes on snow, and now I’m riding to work on my Trucker Deluxe without even needing studded tires. That means it’s been awhile.

After moving across town, I’m figuring out which boxes contain things like my gloves, water bottles and bike parts, and I’m learning new routes to work. Losing old routines is disorienting, but it can be a good thing, too. Fresh starts are energizing. Summer’s coming up, and it’s time to start riding my ass off.

I’ll see you out there. 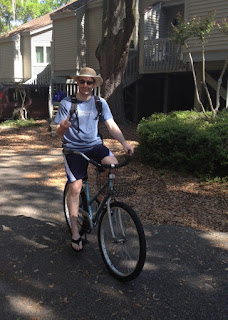 Anchorage is in the throes of breakup. (That's what most people refer to as "spring.")Snow is melting everywhere, and gradually exposing more and more mud and thawing dog shit. But does the Bike Monkee show solidarity and suffer through it with the rest of us? Noooooooooo.He and Jules ran off to become beach bums and rub it in by sending me a flip-off pic from Edisto Beach, S.C., for the Fabulous Finger Gallery. At least he wore that stylish hat!
Posted by Tim at 3:16 PM 4 comments:

Email ThisBlogThis!Share to TwitterShare to FacebookShare to Pinterest
Labels: bike monkee, the finger

Gettin' high on the Chugach 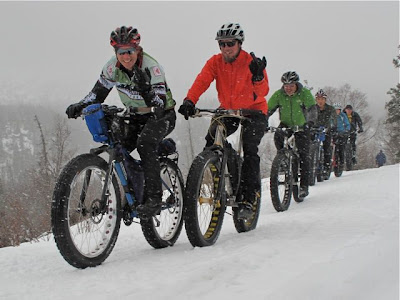 The winter trails are cooking off in the sun and warm, daytime temps, so this is probably the last fat-bike finger flip of the season. Fortunately, it comes from a paceline of Fatback riders rolling down Wolverine on Sunday, because that's a nice way to close out a winter of snow riding.Even if I did have to pedal my fat ass uphill for two hours to get all the way up there.A few intrepid folks are already dusting off the road bikes and starting to riding with an extra 100 pounds of tire pressure. I have to admit, I've caught myself leering at the plastic bike a little more often recently.My first major road outings are probably three weeks away, and that's assuming I survive a move across town and the completion of a major project at work. I always sort of dread the end of fat season, but I'm starting to feel the need for speed.
Posted by Tim at 3:43 PM 2 comments: