Tomorrow will be another long day on the bike for a pre-Fireweed training session, so I'm keeping today's blog update simple. Besides, we haven't had a new entry in the FFG in ... well, who knows how long it has been?

Too freakin' long, that's how long.

If you happen to be on the road between Anchorage and Hope on Saturday, and you see a couple of tired riders looking like they could really use some hamburgers, give us a wave. Whether you use your whole hand or just one finger is up to you.

Miles to go before she sleeps

Flounder, you can't spend your whole life worrying about your mistakes!
You fucked up ... you trusted us!
—Otter, "Animal House"


About a year and a half ago, my friend Heather fucked up. After drinking a lot of wine, she trusted me. When she woke up the next morning, I'm pretty sure she was filled with self-loathing.

Because the previous night, she had agreed to ride the Fireweed 200 with me this year.

In her entire life, she had never ridden 100 miles in a day. And I had spent years saying there is never a valid reason to ride more than 100 miles at a time. But in the dark recesses of my twisted mind, something wanted to ride 200.

Correction: Something wanted to have ridden 200 miles in a day.

Now we're three weeks out from this year's Fireweed. Heather has been following a structured training program since January. I've been following my usual "ride my ass off and see what happens" training program. Her husband, Ken, has surely been muttering unpleasant things about both of us under his breath, and regretting the fact he didn't step in and stop me as I talked her into this shit while he was stretched out on the floor six feet away.

On Friday, Heather and I both took the day off and rode 122 miles to Seward. Now she tells me that we have to spend next Saturday riding 160 miles from Anchorage to Hope and back.

Last night, after the wine was poured, a laptop was opened and we both became official entrants in the 200.

And the weird part is, I think we're actually ready to do this thing.

“The only way I’d drink beer up here is if it were dropped from an airplane,” I told friends last Friday as we settled in for the night at Devil’s Pass cabin on the Kenai Peninsula.

The line got a laugh from people who had spent the afternoon hiking and mountain biking about 10 miles up to the pass, but no one took it seriously until a couple of hours later, when a small plane passed high overhead, then banked and turned up the valley as it lost altitude. “Does anybody want a cold beer?” I asked.

The only thing better than a bike trip in the backcountry is a backcountry bike trip with an airdrop of food and beer. My friend Stacy had arranged this one with a friend of hers who has a plane and welcomes excuses to fly it. I had provided info on how to find the cabin, but was sworn to secrecy until the plane arrived and Stacy began chucking bundles of foam and duct tape out an open door.

They made drops on three passes, nailing perfect shots that made it easy to retrieve the bundles – two six-packs of cold beer, and a box of sandwiches and cookies.

“Oh my god, this is awesome,” Emilie said as we laughed and cut open the bundles. “Only in Alaska would you see something like this.”

I suppose it could be done anywhere, but she had a point. Alaska is full of private planes owned by the kind of people who think it's a cool idea to fly into the mountains and chuck beer at thirsty mountain bikers.

That's part of what makes this place great.
Posted by Tim at 2:00 PM 2 comments: 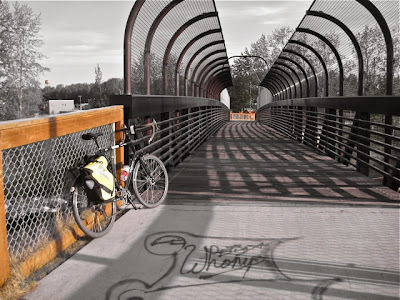 I like busy bike paths. I like them because I love to see people getting exercise and using bikes as transportation. And I’ve written on this blog about the fun of seeing other bike commuters on a regular basis, wondering about their stories and missing them when they disappear, even if we’ve never spoken a word to one another. 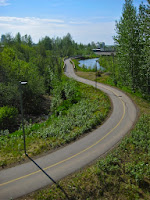 But this year, I detoured from my usual route for a few weeks during the spring thaw. I abandoned the popular Chester Creek trail, which is heavily wooded and tends to stay icy longer than some other options. I put together a series of paved paths and on-street bike lanes that makes for a nice commute between my home in the university area and my office downtown. Few other bike commuters seem to use any part of this route, but I've largely stuck with it.

Maybe it’s unpopular because it passes through Mountain View, a part of town that some people call “the Hood.” One old co-worker used to call it “Murder View.” That’s a bit harsh, but point taken: It’s not the most desirable part of Anchorage. When I see someone else on a bicycle there, it’s probably because it's his only option.

But for some reason, I like my funky new route. And I enjoy having it to myself. No one in Mountain View has ever hassled me, and the Ship Creek trail is a great path through woods, industrial zones, and over the railroad tracks.

I’m more likely to see a moose or beaver than another bike commuter, so I’m free to lose myself in a podcast without any responsibility for smiling, waving or passing other riders.

A morning commute that’s devoid of social interaction. For a guy who’s not a “morning person,” that’s a pretty sweet deal.
Posted by Tim at 6:36 AM 1 comment:

The kindness of strangers

Let's face it. After ibuprofen, Tums may be the most sought-after legal supplement among bicyclists. I've lost track of how many times friends have needed it to settle stomachs during races and long rides.

My friend H needed some during Sunday's hot, 103-mile ride, so when we hit our turnaround point in the little seaside town of Hope, we stopped at a store on what passes for "Main Street." We figured the store would stock Tums, along with other commonly requested things like lip balm and Band-Aids.

I still don't know if the store actually stocked the stuff for sale because, when H asked for them, the lady behind the counter simply dumped a few Tums tablets in a baggie and handed them over. No charge.

Shit like that is why people love small towns.
Posted by Tim at 10:12 PM No comments:

My old 2004 Specialized Epic served me well for thousands of miles. After I stripped it for parts to build my new 29er, it just didn’t look right to have the bare frame hanging from a hook in my garage. (This should come as no surprise to anyone who read my recent post about appreciating old gear.)

So when my son started talking about getting his first bike in years because he wants to ride with a co-worker and get in shape before leaving for the police academy this summer, ideas started brewing. After only a few weeks of rest, it was time for the Epic to come out of retirement.

The rear shock is in decent shape, and the Rock Shox fork is only two years old, so with a new set of pivots and bearings to put new life in the frame, there’s no reason this thing can’t put in a few more years on singletrack.

Old parts were brought out of boxes in the garage. New parts were purchased. Used stuff was bought from a friend. Finally, I started dinking around for a couple of evenings and managed to rebuild the rear suspension pivots. Next thing I knew, I’d go out to spend a few minutes bolting on a part or two, and a couple of hours would pass.

Before long, it started looking like a bicycle again. And then I was doing test rides on the street in front of my condo as I dialed in the shifting.

In a couple of days, my son will stop by to pick up his “new” bike, and I’ll say goodbye to my old one. I’ll sort of miss it when it’s gone.

But bikes exist to be ridden, not to collect dust in garages. Knowing this bike has a second life makes me feel good. And that’s Epic.
Posted by Tim at 9:57 PM 1 comment: