Rum and cooked animals and bullshit by the ton,
That party lasted way too long and I had too much fun.
—Jimmy Buffett, "Bank of Bad Habits" 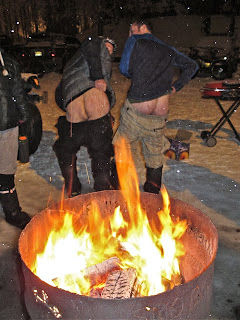 Double moons over the burn barrel.
(Names withheld to protect the not-even-remotely-innocent.)

Long holiday weekends are never long enough.
Thanks to the Frigid Bits crowd for giving me
a healthy dose of sanity-restoring entertainment. 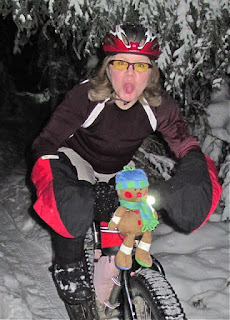 Let's see how long it lasts.
Because returning to reality
is going to suck.
Posted by Tim at 9:25 PM 1 comment: 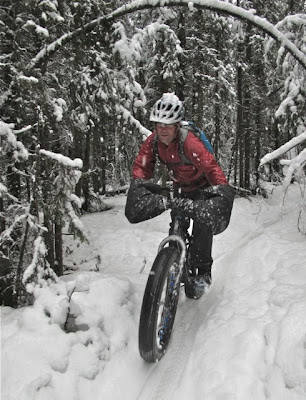 A column of fat bikes rolled through the woods
on Thanksgiving Day
as big flakes fell from the sky
and wet snow covered the ground.

Wet rotors howled and squealed
like the flutes and clarinets
in a seventh-grade band
on the first day of school.

Even ugly music
can be a wonderful sound.
Posted by Tim at 1:15 PM 1 comment:

I would have helped Heather in this situation
on Blue Dot last Saturday. Really.
But Julie's words echoed in my head,
and I was afraid I might get punched.
Besides, I had pictures to take. 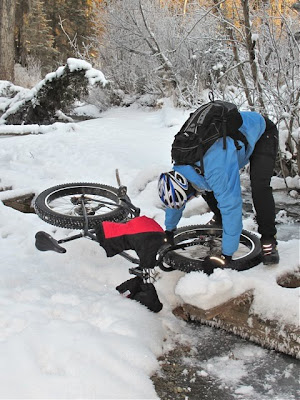 That ice looks fairly thick,
and the water isn't deep this time of year. 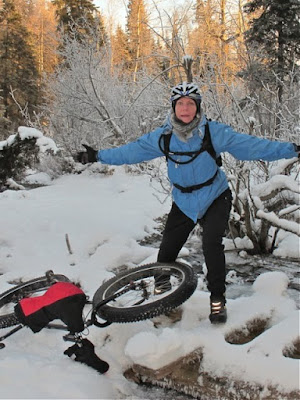 I knew she'd recover gracefully. It was
like watching a fine gymnast nail the dismount.

Now it's up to you, the judges,
to score her performance.
Does she deserve a spot on the medal stand
for her routine on the uneven parallel bars
of the Blue Dot bridge?

Winter was off to such a nice start.

The fat biking was sweet for days until last weekend’s warm weather hit. Next thing I knew, the trails were turning to slush, and my route to work went from packed snow to ice that forc 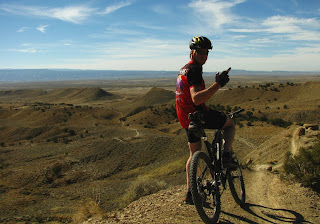 ed me to park the Pugsley and break out the studs.

The whole mess makes me envy Daniel, who sent today’s Fabulous Finger Photo from Joe’s Ridge in Fruita. If I’ve gotta have my stomach come up in my throat during a scary moment, I’d rather have it happen on Joe’s than on a wicked-slick patch of hard-as-concrete glare ice during my morning commute.

Besides, a ride at the Bookcliffs ends at a cold beer. A morning commute just ends at work.

Oh, well. Winter will return. And snow will renew the trails (I hope) even if there isn’t any in the forecast for the next week. It’s fat-bike season, dammit.

By the way, there are still “No Waxing Required” frame stickers available, so if you’re a winter rider who feels like blowing a raspberry at Anchorage’s bike-hating ski snobs, hit me up for a freebie when you see me around town.

Then you can proudly let your freak flag fly.
Posted by Tim at 10:30 PM 1 comment:

Email ThisBlogThis!Share to TwitterShare to FacebookShare to Pinterest
Labels: the finger, winter

Don't piss her off 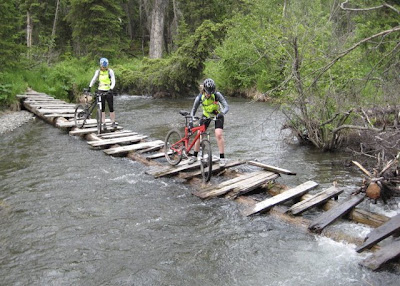 Blue Dot, Summer 2008
I don't understand why my pictures from Blue Dot always cause my friend Jeff over at Bike Carson to question my sense of chivalry. When I first posted this picture of Maura and Heather crossing the treacherous Blue Dot bridge over Campbell Creek a couple of years ago, he posted a comment that suggested I might consider a good photo to be of more importance than my friends' safety. 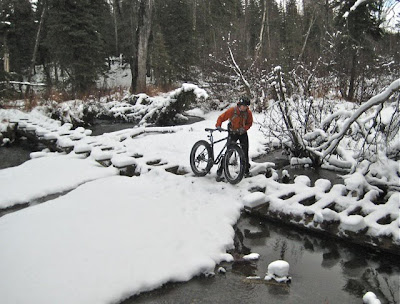 Blue Dot, Yesterday Afternoon
And after I Facebooked this new picture of Julie crossing the same bridge on Saturday, he posted a similar comment under it. But Jeff lives in Nevada, so there's something he doesn't know about the people I ride with.

To be fair, Heather routinely gives me shit about things like shooting pictures when I could be offering her a hand. But the truth is, she just looks for any excuse to give me shit. So when she started in again Saturday night, and I was laughing about similar comments left on my blog, Julie chimed in with the following observation:

"These people don't realize that you ride with women who would hit you if you offered us help."

Keep that in mind the next time you see me use a photo in which a woman looks like she might need assistance.

Show me the money 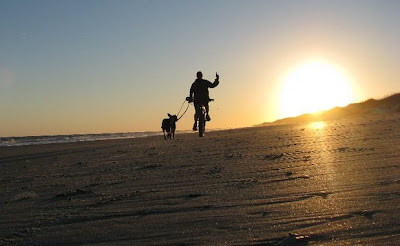 Sometimes, bike news comes along and gives me hope. I try to not let it go to my head, because the next story I read will likely be about some drunk, text-messaging dumbass in a monster truck who ran over a cyclist and didn't get charged with anything.

But I occasionally like to savor glimmers of optimism, if only for a few moments. The folks at Paramount Cycles yesterday posted a Facebook link to this story at the Huffington Post about the increasing number of people taking vacations on bikes. More people are taking trips for events like RAGBRAI, or spending their free time (and money) on commercial tours.

Best of all, cities and states are starting to recognize the economic impact of cycling. That leads to more investment to lure bike riders and provide for their needs. The state of Wisconsin reports that out-of-state visitors traveling there to ride bikes generated half a billion dollars in economic activity.

It's enough to make a person think that maybe—just maybe—a day will come when we'll be seen not as Lycra-wearing goofballs, but as the economic force we actually are. You don't think we're an economic force? Look at all the bike-rack-equipped cars in the parking lots of hotels, stores and restaurants in places like Moab, Crested Butte and Fruita, or any other well-known bike destination. Ask a member of the chamber of commerce in one of those towns what he thinks of bike riders, he'll probably say one thing: Cha-ching!

Speaking of traveling bike riders, today's Fabulous Finger Photo comes from my friend Debbie, who recently took her snow bike and rode off into the sunset on a beach down south. I guess this was her way of saying goodbye.

Sort of reminds me of the departing gesture of a girlfriend I once knew.
Posted by Tim at 6:31 AM 4 comments: 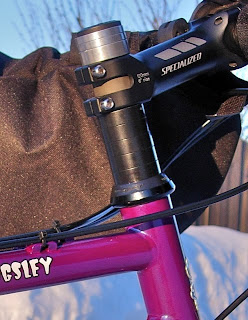 In a crowd of mountain bikers, everyone has an opinion about everything related to bikes. The guy I always listen to is Mr. Johnson.

Let’s say you’re choosing a new bike, and you’re wondering if it’s too large. Mr. Johnson won’t steer you wrong. If he says you want more top-tube clearance, he knows what he’s talking about. Get a smaller frame.

Or maybe Mr. Johnson tells you that your saddle needs to be adjusted. Maybe the nose is too high. Again, Mr. Johnson is always right. And he’s a sensitive guy. You don’t want to hurt Mr. Johnson, so make him happy and adjust that flippin’ saddle. You’ll be glad you did it, and so will Mr. Johnson.

So when Mr. Johnson told me the other day that it was time to shorte 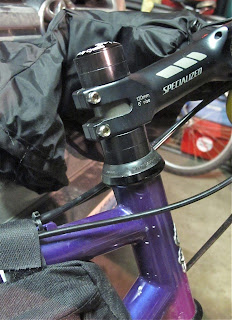 n the steerer tube on my Pugsley’s fork, I trusted him. I know his only bike-related interest is enjoying many more happy rides together, and he’s trying to take care of me.

I cut the steerer a bit back when I first built the Pugs, but I left it fairly long to allow later adjustments. Then, procrastination set in. But when I was pulling myself off the ground after a minor crash the other day, Mr. Johnson said, “Dude, seriously! Chop that shit already!”

I thought about it, and decided that a few minutes of work in the garage was the least I could do for a guy like Mr. Johnson. Because—and I’m not at all embarrassed to say this—I love Mr. Johnson.

The next time he sees that steerer tube, I really hope Mr. Johnson will feel good about the changes I've made.
Posted by Tim at 11:09 AM 6 comments:

Holy friggin' flip-offs, boys and girls, business is booming in the Fabulous Finger Gallery! With three great new photos in my inbox, I figured it's time for an All-finger Day here at Bicycles & Icicles. Before we begin, let's pause for a moment of silence in recognition of the woman who helped start it all nearly three years ago ... my good friend Heather.

Heather's so proud of her role in this fine use of the Internet that I think she lists it on her resume, as well she should. And with that formality behind us, let's get to the goodies: 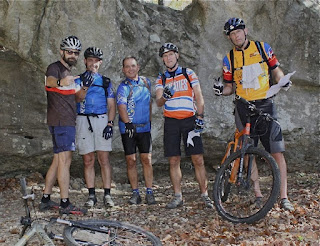 Today's first shot comes from Miner's Rock in Lake Leatherwood, Arkansas, courtesy of my brother Matt and his Midwestern crew during their recent trip into the Ozarks. Their rides included places like Slaughter Pen Hollow. In other words, you might not want to ask too many questions. 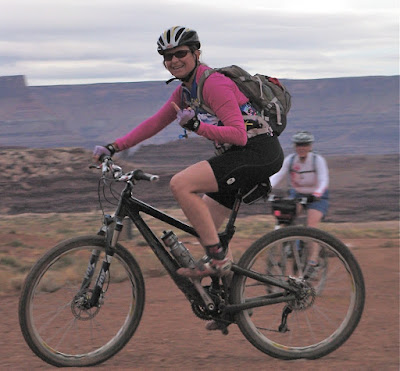 And next we have the first of two pics from the White Rim Trail. This one's courtesy of Mountain Bike Anchorage author Rose Austin, who recently completed her usual fall tour of great riding destinations in the Southwest. Welcome back to the land of ice, Rose.

And last today—but far from least—we have the pleasure of a whole bevy of mountain-biking babes lettin' the birds fly during their White Rim ride. It's Anchorage's own Dirt Divas on tour. Divas, a desert sunset and Fat Tire ale ... damn good combination, if you ask me.
Posted by Tim at 5:00 PM 2 comments:

Well, it's a start 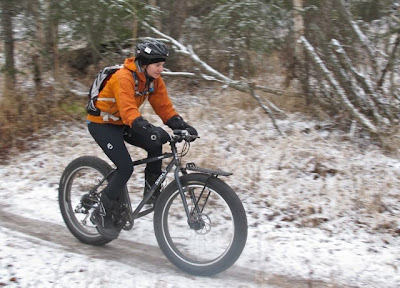 Jules cruises down icy Rover's Run on Sunday
while wearing a jacket she thoughtfully
coordinated with the colors on my new blog format.
Get the fat bikes out. It took until November 1, but there’s finally some snow on the ground. It’s wet crud mixed with rain but it’s here, it’s white and it’s covering the icy ruts and tire tracks that made Rover’s so dicey on Sunday. 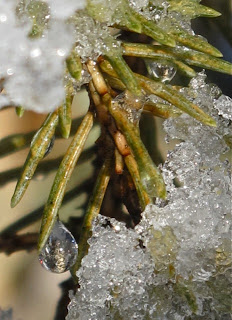 The first snowfall of the season always snarls the morning car commute, but I’m lucky enough to be on vacation this week, so I slept late, ate a big breakfast and hit the Hillside on my Pugsley today. I got so many first tracks that I had trouble finding the trail a few times, and ended up taking wrong turns and riding sections I hadn’t expected—and that was part of the fun.

The sun even came out, but that’s not necessarily a good thing this early in the season. With temps in the mid-30s, it didn’t take long for the “rain shower” to start as snowmelt dripped off trees.

With more snow in the forecast, let’s hope the temperatures drop and help the trails set up.