I took a picture yesterday that made me happy. I had walked a couple of blocks from my new office—which comes with the new job that has kept me too busy to blog for the past few days—to try a little sandwich shop in downtown Anchorage.

After I downed my pastrami and made a tiny dent in some work-related reading, I stepped out on the sidewalk an noticed a bunch of parking meters covered full of locked-up bicycles. I've spent little weekday time downtown over the past eight years, and during my first week back in the neighborhood, I've noticed a lot more bike commuters than I used to see.

But this was a sweet thing to witness. A long string of bicycles, and all sorts of people coming and going from nearby shops while wearing or carrying bike helmets. I like this change. And I think I'm going to like being downtown again.

Best of all, after three days of driving to work while learning a new routine, I rejoined the ranks of bike commuters this morning.
Posted by Tim at 7:49 PM 6 comments:

Admittedly, this Long Haul Trucker was built for a tall person, and that rack is waaaay down there, but seriously? This is how the dude locks his bike? 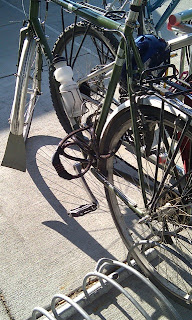 It’s almost enough to make a guy want to take the bike for a few hours, if there was a way to find the owner and return it after he promised himself to never repeat such a mistake.

Poorly locked bikes always amaze me. I once saw a kid’s bike at my daughter’s school with a cheap cable running through the rack and around the seatpost ... with more than enough slack cable to simply pull it off around the saddle.

In college, I was walking out of the student union one day when I heard a young woman exclaim to her friend, “Where’s my bike?! I left it right here!” When the friend asked if she had locked it, she replied, “YES!”

The problem was, she was standing in the middle of a half-acre of featureless, bike-rack-free concrete. She was one of many students who routinely ran a cable lock through the front wheel and through the frame, then assumed no thief would simply pick up the bike and carry it away.

Although bikes are stolen here every day, Anchorage has never seemed like a city where serious bike thieves prowl. I suspect many thefts are crimes of opportunity.

Slow down and double-check your lock before walking away. Don’t give thieves an opportunity.
Posted by Tim at 9:46 PM 1 comment: 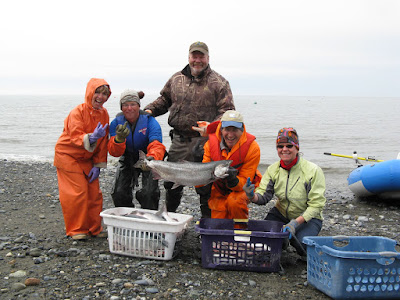 We have another fresh photo for the Fabulous Finger Gallery, courtesy of Alaska Bike Girl. That's her on the right, smiling at the prospect of chowin' down on that big king salmon, which she and her friends caught last weekend while the rest of us were out riding singletrack.

Personally, I think pedaling over Johnson Pass was more fun than splashing around in the frigid waters of lower Cook Inlet that day but, come winter, Rose will still be eating a big, tasty stash of fish.
Posted by Tim at 10:43 PM 1 comment: I finally got out Saturday for the first big mountain-bike ride of summer, and was reminded of A) how beautiful the scenery is on Johnson Pass Trail, and B) what crappy shape I'm in this year. Fortunately, my friends let me set the pace and cruise easy all day.

Then we ate pizza and drank beer. And that right there, boys and girls, is what you call a kick-ass Saturday. 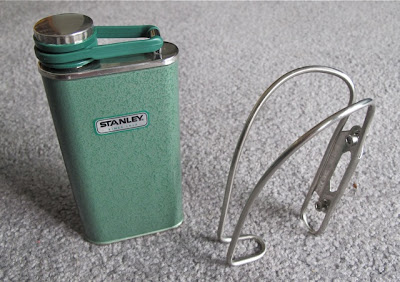 Fortunately for me, I'm a dad, which means I got a little schwag on Father's Day. My sweet daughter Hannah gave me a flask with a water bottle cage she had reshaped to carry it. And what accessory do you think will be the first to get bolted to the frame of my new Long Haul Trucker?

I hate it when bike riders piss me off as much as Nordic skiers do. I also hate that our sport has fragmented into distinct groups, one of which seems to attract more than its share of self-absorbed douche bags.

Yeah, I’m talking about you, downhill punks. It’s hard enough to respect coasters who do nothing but shuttle uphill in pickups, but when you behave like assholes, I simply abandon any pretense of respecting you.

I know some downhillers are nice people. I’ve know one or two of them. But for every good one, there seems to be 25 pricks. They’re the ones who bomb two-way singletrack, endangering anyone pedaling uphill.

They’re the ones who skid into every corner, shredding every trail they touch.

They’re the ones who do nothing to help build and maintain trails.

They’re the ones who strut around with the cocky attitudes of teenage brats desperate to impress chicks.

They’re the ones who cop an ugly attitude when a real mountain biker tries to have a civil conversation about controlling speed and respecting the safety of uphill riders.

They’re the ones who would probably never read this blog. But to all of them I have only one thing to say: Screw you.
Posted by Tim at 9:07 PM 3 comments:

Email ThisBlogThis!Share to TwitterShare to FacebookShare to Pinterest
Labels: downhillers

Quote of the Week 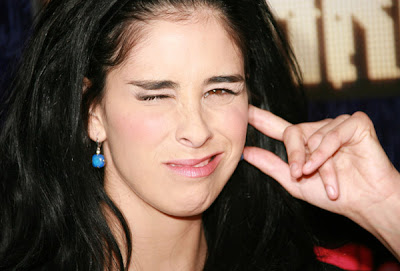 "Had my first long bike ride - wow! It was like flying!
Like flying while getting punched in the vagina!"

The Great Singlespeed Experiment is coming to an end. I recently posted my thoughts about riding to work on a singlespeed, and stated that if my commute were to get any longer, t 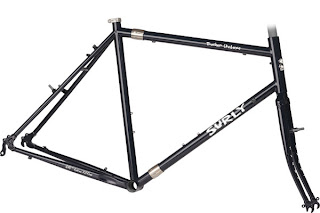 he first thing I’d do is install gears on my old Stumpjumper.

I knew at the time that a longer commute was a possibility. Now that it’s becoming a reality when I move to a new job later this month, I’ve decided to retire the beloved 15-year-old Stumpy and its bombproof M2 frame, and replace it with a 3-in-1 ride.

Surly’s new Trucker Deluxe—which won’t be released until about the first of July—is equipped with S&S couplers and will 1.) make a faster, more comfortable bike for my 20-mile roundtrip commute; 2.) eliminate my desire to buy a Bike Friday to avoid airline baggage-fee extortion and still get exercise during short, nonbiking vacations and business trips; 3.) accommodate tires up to 2.1” wide, meaning I won’t to keep an extra bike around for icy conditions.

There’s even the fourth benefit of giving me a touring and brevet bike in case I someday manager to get off my ice and actually do a tour or brevet. And because the Trucker Deluxe comes only in a 26-inch-wheel version, I can save money by cannibalizing wheels, brakes, fenders, etc., from my existing bike and spare-parts box. 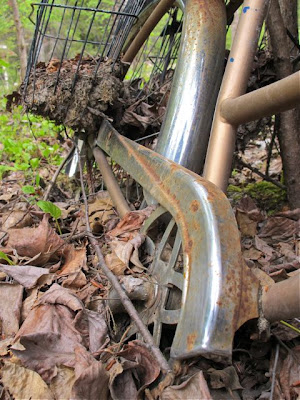 Broken bicycles, old busted chains
With rusted handle bars, out in the rain
Somebody must have an orphanage for
All these things that nobody wants any more

Recycling isn’t just the right thing to do. In Southeast Alaska, it can help keep you dry while riding to work. I spotted this homemade fender on a bike sitting just outside the Juneau 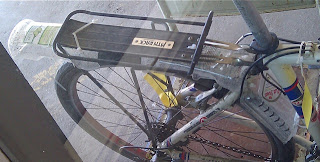 airport a few days ago, and it was a fun reminder of the kind do-it-yourself ingenuity I often see on battered bikes in this part of the state.

I think this stuff is more common here because A) new accessories can be hard to come by in the small towns and many islands scattered across the state’s panhandle, and B) the summer workers who flood in here each year live as cheaply as possible and often have only fleeting, three-month relationships with battered bikes that are either sold or abandoned when it’s time to head south again.

The result is bikes that are used to get from Point A to Point B with a minimum of expense and frills. There’s a nice purity in that.

It doesn’t appear that the guy who rides this bike felt any need to spend $30 on a fancy fender. He might not have even drank the cocktail mix or eaten the fruit that provided his raw materials, but he certainly spent the time to do a neat job on his homemade rig. And that makes it a beautiful thing.
Posted by Tim at 2:07 PM No comments: