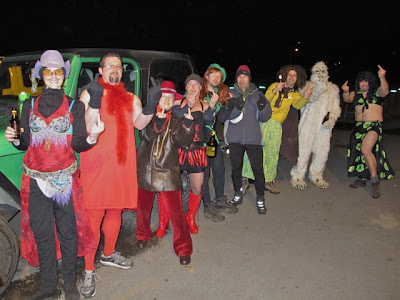 Fabulous Fingers from the costume finalists.
When you’re walking out of a gay bar to get back on your bike, and a large lesbian laughs and says, “You’ve got balls!” you know you’re having a hell of a Saturday night.

It’s also a sign that another Frigid Bits season is under way, and this year kicked o 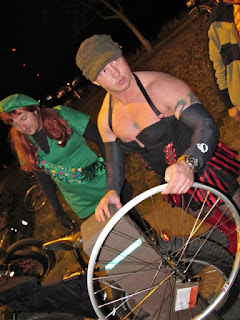 ff with the usual Halloween scavenger-hunt ride. Not that there’s anything “usual” about it, especially when the costume theme is drag, and you get sent to Mad Myrna’s for a drink. I was glad to leave after one round, because I was starting to notice some impressive cleavage and I wasn’t sure all of it was on women.

Speaking of partial nudity, there was less of it around the post-ride fire this year, but not by a long shot. The guy who flashed the most skin with a corset and fishnet stockings scored the grand prize of a set of mountain bike wheels. And it was well-deserved, considering the temperature was below freezing.

Best of all, the soon-to-be-famous Frigid Bits Burn Barrel was glowing hot, and the post-ride beer was good and cold. It’s always good to see the winter biking crowd reunited around the shrine.

Keep the firewood ready, and let winter begin.
Posted by Tim at 8:54 PM No comments:

Email ThisBlogThis!Share to TwitterShare to FacebookShare to Pinterest
Labels: Frigid Bits, the finger 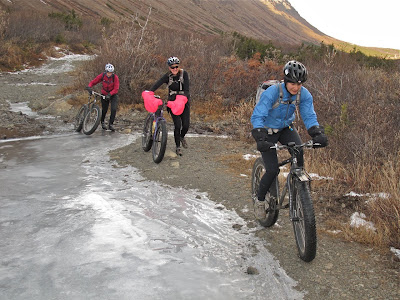 Sometimes, a good day comes along just when you need it. After a long spell of taking it easy while some stitches healed, I finally hit some dirt with friends. A fun ride, sunshine, and a tasty meal with cold beer at Midnight Sun afterward.

The memory just might be enough to keep me sane during the next few days of airports and conference rooms.

It's always good to remember there's a bike waiting at the end. Because I just wanna ride my bike and not be hassled by The Man.
Posted by Tim at 6:01 PM 1 comment: 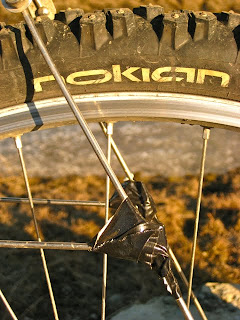 ou take the preventive measure of periodically replacing the zip ties before they become brittle from dry rot.

I don't always do that.

That's why I felt a little resistance and heard a buzzing sound coming from my rear wheel about a block and a half from my house this morning. My old Stumpjumper lacks fender mounts, so mine is, well ... let's just say "creatively" attached to the frame. A zip tie had gone tits-up on me, and I wasn't carrying a spare, so it was time to turn around and head back to the garage.

Times like this are when I love being the only person who services my bikes. There's nothing like building and caring for your own machine, because it means you know all its eccentricities and the funky shit you did to set it up. Well, that's if you did any funky shit to set it up. I don't cut corners on the road bike that does high-speed descents, or the mountain bike that carries me into the middle of nowhere, but my commuter is another matter.

The old Stumpy used to see some action. It's been on singletrack in multiple states from New Mexico to Alaska, but its current form is pure function. It's urban, ugly and utilitarian. I think it's fun to have at least one bike I don't have to be picky about. I can keep repairs quick and cheap, and still end up with a pretty reliable bike. And a simple one.

This morning, I rode back to the garage carefully to avoid destroying anything, then did some quick surgery with a zip tie, crescent wrench and wire cutters, and was rolling out the door about two minutes later. I couldn't have done that if someone else had rigged up my fenders, because I wouldn't have immediately understood where the fender mount had to be positioned, or why the fender was out of alignment after the new zip tie was installed, and how I could adjust the alignment with a wrench in just a few seconds.

Leave it to Janice to soften my pain of being stuck in Anchorage during freeze-up. Instead of flying south to ride in the desert like I did last October, I've been sitting at home with a mouthful of stitches and waiting for the first snowflakes of the year while friends jet off to Arizona, Colorado and Utah for some prime autumn riding. 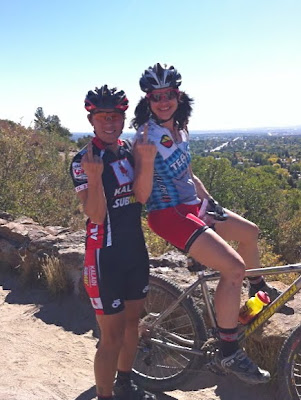 But then Janice bags a damn fine addition to the Finger Gallery while riding with Selene Yeager—Bicycling magazine's "Fit Chick" columnist—during a coaching conference in Colorado Springs. Damn strong work, Queen Bee. And thanks to Selene for the celebrity flip-off.

It's nice to see her carry her streak of badassery into her college racing career. Nice job, Petra.
Posted by Tim at 7:03 PM 1 comment:

Email ThisBlogThis!Share to TwitterShare to FacebookShare to Pinterest
Labels: Petra, the finger

When I scheduled oral surgery for last Wednesday, I was betting on two things this weekend: 1) cold, and 2) rain falling sideways. It's early October, for shit's sake. It seemed like a decent gamble. I lost.

So while sun filled a brilliant blue sky on a perfect autumn weekend, I tramped around my house with a mouthful of stitches, eating soft food, watching movies and scanning Facebook for pictures of all the fun other people were having. I can't really complain, I guess. Everybody's got to miss a great weekend now and then. I'll make up for it later.

In the mean time, I got two new Fabulous Finger Fotos this weekend: 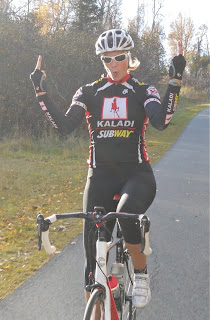 The first is from from my roadie friend, Angela.
She gets points for the hands-free, double-finger approach. 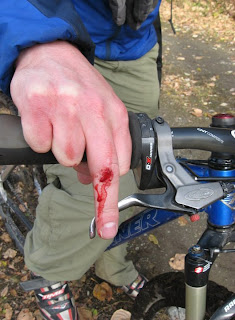 The second is from the Bike Monkee, who had fun
trashing himself up in the high country
while I was riding the recliner.
(I also see he's rockin' a sweet new
carbon handlebar that I don't recognize.)
Here's to hoping the trails are frozen and firm next weekend, when the doctor's "don't break a sweat" orders will be expired.
Posted by Tim at 6:12 PM No comments:

Nothin' but a Hound, dawg 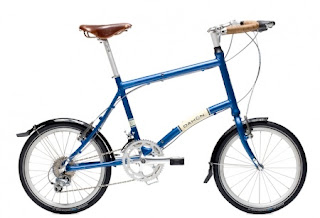 sest thing to shopping I can afford right now.

Since a trip to New Zealand two years ago, I’ve been trying to figure how avoid being stuck without a bike on nonbiking vacations with my family, or short work-related trips. Everybody wins when I get to ride because, after a few days without pedaling, I get a tad difficult to live with. But hauling a big-ass bike crate isn’t always practical—especially when riding days will be rare, or cargo space is limited in a rental car.

Friends have encouraged me to preserve my dignity and manhood by getting a real bike with S&S couplers; something like a Surly Travelers Check. Folders, they say, are just too nerdy, and don’t handle as well as full-size bikes. I would agree, if not for the wonderful attraction of something that folds into a really small package.

I love the idea of a bike that will fit into a car trunk with a couple of suitcases, or be carried through a hotel lobby without attracting unwanted attention from The Man.

And therein lies my attraction to the Smooth Hound from Dahon. It's portable as hell, yet it actually has a frame that looks like a real bike, instead of just a single tube leading to the headset. It has a mustache bar and a Brooks saddle. In other words, it’s a geek bike with some style.

It’s no replacement for a full-on road or mountain bike, but when faced with the option of an evening of hotel-room cable TV, or a two-hour cruise through a strange city, I’d prefer to try being a bike geek with a little style.
Posted by Tim at 5:12 PM 3 comments:

In a New York State of mind

How could anyone have expected the words "New York" and "middle fingers" to appear in the same sentence? OK, pretty much everybody expected that.

But thanks, anyway, to the Saratoga Mountain Bike Association for today's addition to the Fabulous Finger Gallery, and a fine display of universal sign language from upstate New York.