Soggy end to the dry spell 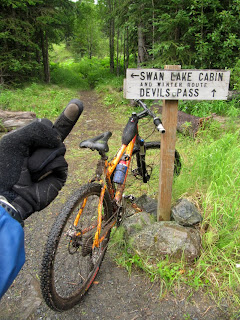 The blog has been in a coma lately. This wasn't helped by a multi-day, non-biking trip out of town. Come to think of it, I'm having a little trouble remembering the last time I went on a real ride. I think it was ... oh, yeah, a freakin' week ago. No wonder I'm gettin' grumpy. Good thing I plan to remedy that situation on Sunday morning.

I returned home the other day and found this photo from Jules, who has been ripping her legs off preparing for this year's Soggy Bottom 100. She felt like flipping the bird to the notorious Swan Lake section of the Resurrection Trail during last weekend's training ride. And I don't blame her.

The Soggy will be held next Saturday. It's one more reminder that summer is flying by. Time to get busy and ride.

Who knows? Maybe I'll start coming up with stuff to rant about on the blog. I hope so, because ranting about not riding just sucks.
Posted by Tim at 9:40 PM 2 comments: 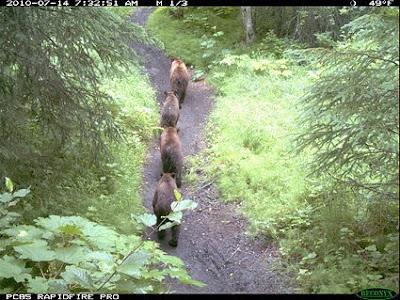 The city is warning trail users—again—to avoid Rover’s Run because a remote camera captured images of a brown bear sow and her two-year-old triplets walking on the trail multiple times over the past week.

For about 30 years, people used Rover’s on a regular basis with no significant bear problems—just an occasional sighting. But since a bad summer two years ago, the municipality has treated Rover’s like a skid-row titty bar full of brawling biker gangs. Nevermind the fact that the bear responsible for a serious mauling was never seen or heard from again, and the most persistently troublesome bear was killed, bringing threatening bear encounters to a screeching halt before that notorious summer ended.

Between trail closures and frequent warnings, the city has terrified many runners and bike riders, thereby cutting human use of Rover’s Run during summer months to a small fraction of what it was prior to 2008. All along, critics of the city’s response have pointed out that if humans vacate the area, bears will feel free to move in, and become bolder about using the trail during daylight hours.

And now cameras are capturing daytime images of a virtual wagon train of brown bears cruising the trail as if they owned it. Coincidence? Maybe not.

Take another look at those three cubs in the picture. They’re two years old. For their entire lives, human use of Rover’s has been minimized. Now Mama’s teaching them they can cruise that area with impunity.

Think they’re going to go away? 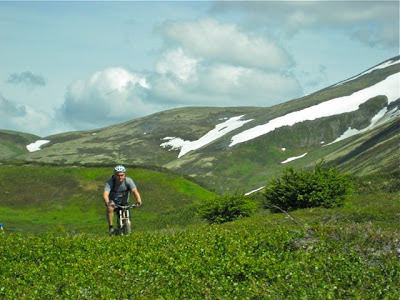 It was the usual Monday morning greeting at work. The receptionist asked about my weekend, and I said something about riding on the Kenai Peninsula. Her immediate response was, “Did you fish?”

This might be my biggest disconnect with many of my fellow Alaskans. For most of them—at least in this part of the state—the words “weekend” and “Kenai” mean fishing. To me, they mean mountain biking.

A similar exchange occurred one day last summer when I was out in the driveway getting the camper ready for a trip, and my next-door neighbor walked over and excitedly asked, “You going fishing?” And this is a neighbor who has watched me ride bicycles through all seasons for several years, but has never seen me carry a fishing rod to the car. Maybe she was just excited by the thought of me seeming normal, for a change.

I don’t mind a little fishing now and then, but it’s a low priority. It’s pretty sedentary. And it’s nowhere near as thrilling as zooming down a nice piece of singletrack.

Besides, I can buy salmon and halibut at the grocery store, if necessary. 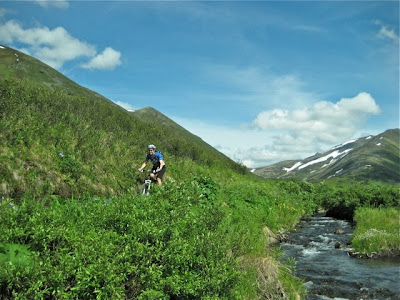 With some rides, it's hard to determine what will be remembered the longest. Saturday's trip across Resurrection Pass was full of unusual elements like, heat; sun bright enough to burn our skin; unusually dry trail; a friend's severely disabled bike in the final quarter of the ride.

But, for me, the most memorable moment might be the bear. It crashed through the willows a few yards to my left, huffing and grunting as it—and I'm very happy to say this—found a way to run away from me instead of toward me. He was fast, brown and huge, and he did me a favor.

I'm often too quiet and complacent in serious bear country. I make too little noise and tend to forget about the risk of surprising a dangerous animal. A close encounter is a good reminder that I need to step it up a notch. Be louder. More aware.

Saturday's encounter happened so fast, it wasn't even very scary. It was later, in quieter moments, that it was easy to imagine what could have happened if the bear had chosen fight over flight.

And that wasn't much fun to think about.
Posted by Tim at 8:56 PM 3 comments: 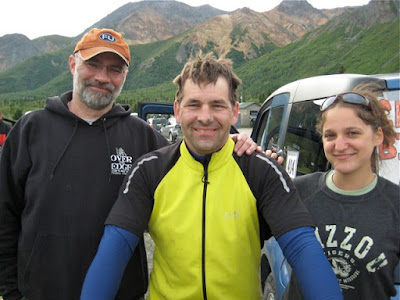 Congratulations to all finishers of this weekend's Fireweed 400. My respect for the mental and physical hardness of such people could only grow from experiencing the race for my first time as a crew member.

Congratulations to Leonard Fancher, who overcame a difficult first day and rallied to actually gain speed over the final 200 miles and finish in 30 hours, 54 minutes, 2 seconds. Our team rolled out of the Valdez checkpoint at 4:20 a.m. full of worry about our ability to finish—but only because we had no way of knowing that Leonard would find new life on a rainy morning, and uncork a hell of a ride. Congrats, too, to my other friends among the elite group of survivors: Tony Berberich, Erik Christensen and "Broken Toe Joe" Pollock.

Thanks to Janice for her phone-and-text coaching consultations during the race, and to all the other crewing friends who made me smile when we saw each other on the road: Julie, Jill, Sean and, of course, Sarah, my partner on Team Fancher. With no bike-race experience of any kind, Sarah endured 39 sleepless hours with boundless energy and humor, and found ways to contribute that I had never imagined.

If Sarah's still available after she graduates from college next summer, I know a couple of racers who would be happy to put her to work.
Posted by Tim at 8:26 PM 2 comments:

A friend who works in a bike shop told me last year that being employed at a shop doesn't really make sense for someone who rides. The problem is that summer is when you want to be on trails, 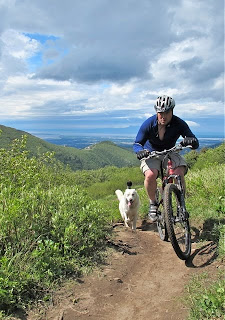 but instead you're stuck in the shop, working.

The way things have been lately, it almost feels like the same thing applies to people who write bike blogs. The difference is, we don't have to show up for work. Well, not blog work, anyway.

The blog gets push aside when friends and trails call. Or bike maintenance is necessary. Or any of the other demands of "real life" get in the way. But this is also when photos and stories pile up ... some of which I could probably write about without getting punched in the kidneys by the people with whom I ride.

Come to think of it, only one of them hits me, but I'd like to keep the number from growing so I gots to sort this shit out.
Posted by Tim at 9:31 PM 1 comment: