Email ThisBlogThis!Share to TwitterShare to FacebookShare to Pinterest
Labels: 2010, slideshow 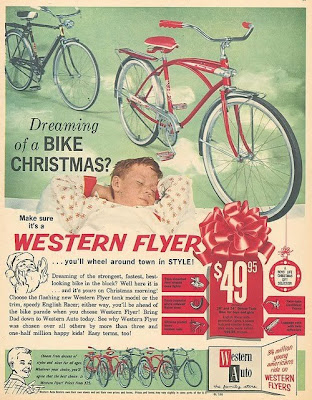 Happy Whatever the Hell You're Into,
and may the imaginary friend
of your choice bestow blessings
or a lot of free shit upon you.

The blog will be taking a holiday hiatus
for the next week or so because, let's face it,
we all have better things to do, don't we?

There may or may not be any new posts
between now and New Year's Eve.
Check back about then, though,
for my end-of-the-year slideshow.
Posted by Tim at 2:00 PM 1 comment:

Bright spot in the darkness

Every winter, people call me crazy for riding to work. Every winter, I tell them it’s easier than it looks. I try to dispel the myth that winter cyclists are nuts.

But the reputation may have certain benefits. Recently, as temperatures and our allotment of daylight both fell, I’ve sensed a change in my gasoline-addicted commuting brethren.

I’ve always found most Anchorage motorists to be fairly considerate of bicyclists, but they’re never more generous than on frigid, dark mornings in the depths of winter. About two weeks ago, I started noticing more drivers yielding the right of way. Those behind me will often slow down and wait for me to ride away before they make right turns. As I cross the roads feeding into a large roundabout near my house, drivers are stopping to let me cross in front of them while the motorists behind them wait.

Bike commuters don’t get many perks in this motorized world. So when a new one comes along—however temporary it may be—it doesn’t really matter whether it comes from pity, fear, or respect. I’ll just enjoy it while it lasts.

Tonight, I'll just let the images
speak for themselves. 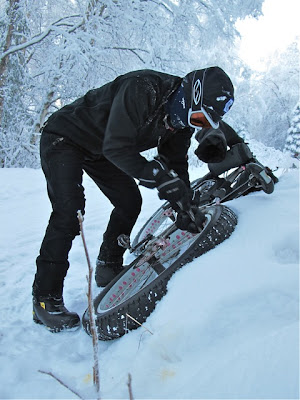 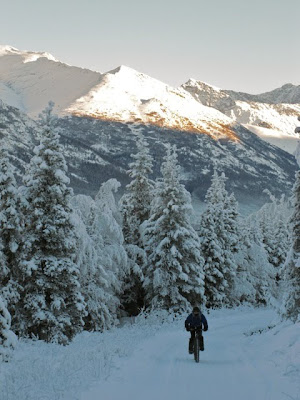 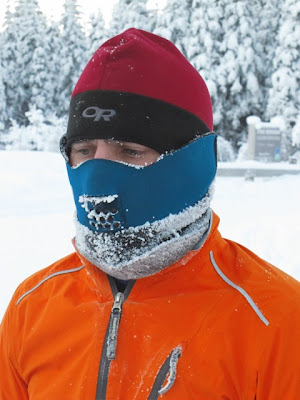 End of the Dream

My review of Bicycle Dreams was featured on the movie’s Facebook page yesterday, bringing a bunch of new visitors to Bicycles & Icicles. If you missed my review, here’s the sum 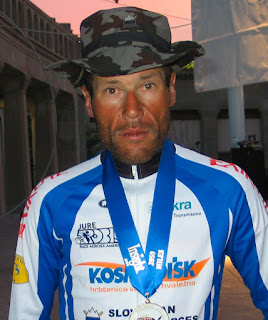 mary: See this movie about the Race Across America.

Sadly, that great movie popped back into my life last week when I read about the death of Jure Robic, the Slovenian soldier and five-time RAAM winner who was prominently featured in Stephen Auerbach’s documentary. One of the more memorable scenes involved Robic arguing with his crew as they tried to talk him back onto his bike when he wanted to quit. In the depths of extreme sleep deprivation, he had lost his ability to conjure a mental image of his wife and child, and he suspected his crew of leading him in circles, because he hadn’t seen another RAAM racer in days. (He was leading, so there was no one to see.)

The RAAM requires obsession, and Robic had it. Like other winners, he racked up tens of thousands of miles per year. And at the age of 45, he was barely eking out a living. After aging out of the Slovenian Army’s sports unit, he struggled to cover living expenses, race fees and travel costs. According to Outside magazine, Robic trained for this year’s RAAM despite not knowing until five weeks before the race if he’d have enough money to compete.

Robic was hit by a car in September while descending a mountain road near his home in Slovenia. By all accounts, he was—off the bike, anyway—a genuinely kind human being. His death is tragic.

But I can’t comprehend what makes a person set aside so many other parts of life to excel at a nearly invisible sport that costs more than it pays. Some people would attribute it to a drive to be the best at something. I question whether it’s worth it.

Sometimes I wonder if I’m too hooked on one sport, hobby, or whatever you want to call a bicycling addiction. Like most of us, however, I have other interests, however secondary they may be. I have a pretty normal life.

I could never be the athlete Robic was. And I’m happy about that.
Posted by Tim at 6:00 PM 2 comments: 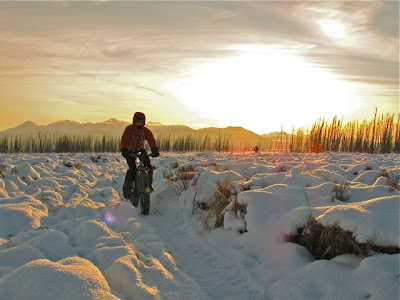 That’s how much daylight we had today. It was one minute, 53 seconds less than yesterday. And it was more than we’ll have tomorrow.

This is the hardest time of year for ma 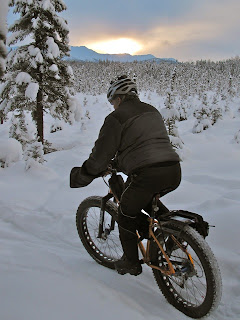 ny people in Alaska. Shadows are long at mid-day and, if you have a day job, your morning and afternoon commutes are both done in darkness.

Everyone has a different way of coping with the lack of sun. Some sit in front of SAD lights; some turn to the warm glow of a bottle; the lucky ones buy plane tickets to the tropics; others cook themselves in tanning salons until they look like overgrown Oompa Loompas.

Fortunately, I’ve never been all that adversely affected by the lack of light. I rather enjoy it, as a matter of fact. It makes those long days in March that much sweeter. And pedaling through a forest illuminated only by battery-powered LEDs is fun as hell. A night of riding always helps me carry some sanity through the next day.

Some people think the dim light of winter is depressing. I think it’s photogenic. Strangely enough, I’m considered pretty cynical on many matters, but I’m an optimist when it comes to winter. I skip the SAD lights and tanning salons. A bunch of friends on fat bikes is the best antidepressant I've found so far.

But, just to be on the safe side, I have some of those tickets to the tropics. 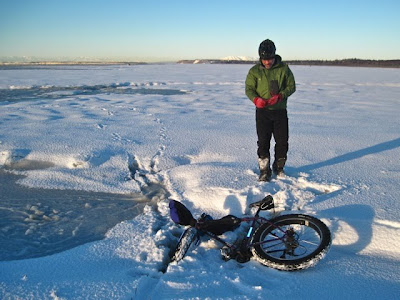 Don't try this at home, kids. (Photo by Tony A.)
There always seems to be that two- or three-second decision period as I approach an obstacle. Can I make it? What's the penalty if I blow it? Too often, I've found myself being overly cautious and missing my chance to pull off the move.

Too bad I didn't do that Sunday afternoon w hile riding on the coastal flats in South Anchorage. I knew there was a chance the tidal cut wasn't yet frozen, but temps have been pretty cold lately and, besides, I knew it wasn't very wide, and probably not very deep. And I knew that if things did go bad, I wasn't too far from home. So I went for it.

And that sucker was a super-thick, saltwater margarita.

All I could do as my bike went down was reach and scramble for the other side, which is a bit difficult when you put your foot down and it sinks to up to your knee with no sign of touching bottom. I scooted gracelessly out the other side, and my stranded Pugsley gave everyone in the group a good laugh while Tony snapped this photo.

Times like this are why we buy good gear. My Neos overboots kept my feet dry, and I gained a little more respect for my already beloved BB7 brakes from Avid. My front wheel came out of the slop covered in ice, with the front brake encased in the stuff—and it worked just fine all the way home. That's some good stuff.

But I'll take my next margarita on the rocks, not blended.
Posted by Tim at 9:49 PM No comments:

A License to Have Fun

In response to pressure from cyclists who want access to Middle Fork Trail, Chugach State Park is issuing special-use permits this winter, allowing riders of fat bikes to use some areas traditionally closed to bikes. 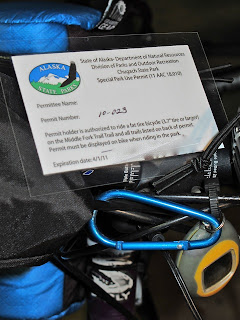 Some people are excited about this, and others are offended by the idea that bike riders need a permit to use a public, snow-covered trail where they will have zero permanent impact. Some feel that the fat-tire stipulation is discriminatory. I understand their frustration, but I’m taking the position that this is progress.

For years, park maps have identified Middle Fork as a “No Bicycles” trail. And with good reason. During summer, it’s a hellish quagmire that’s unsuitable for anything but mosquitoes. I know this firsthand, because I accidentally ended up there one evening seven or eight years ago during a solo ride on a weeknight. At one point, I sank up to the middle of my quads in thick, gooey mud. I could see myself being stuck there for hours as insects drained me of blood. By the time I escaped, I was limping, hungry and caked in slimy filth. I got home hours later than planned.

But Alaska trails change in winter. They freeze hard and get buried under snow. Middle Fork is a multi-use route and there’s no reason to ban snow bikes from it, other than tradition. But with no accommodation for bikes in the park’s old master plan, land managers are at least taking steps to ease bikes into acceptance, despite the whining of other trail users who don’t want to share.

Some day, hopefully, there will be no need for permit to ride trails in Chugach State Park. But for now, a free permit allows fat-bikers to use trails they otherwise couldn’t, and the permit system allows managers to gauge how many cyclists want such access.

I say vote with your feet, Anchorage riders. Scoot on down to the Potter headquarters of CSP and pick up a permit, then go ride Middle Fork on a fat bike this winter. Comply with the rules. Show park managers that they can have a better experience dealing with mountain bikers than they have with all the bike-hating whiners.