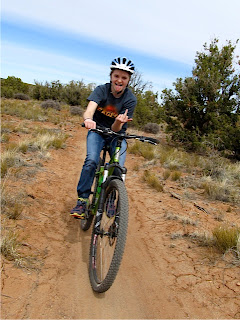 In a glorious moment for family history, my niece Anne took advantage of her father's inattention last week and racked up her first non-anonymous contribution to the Fabulous Finger Gallery while riding Intrepid at Dead Horse Point State Park outside Moab.

Anne -- whose brother once carried the flip-off passion all the way to China -- made her first appearance here in 2011, but her dad required her to do it discreetly. This time, she unleashed the beast while he was shooting with the camera held under his arm and pointed backward.

Annie seized the moment and became a debutante at the Flip-off Ball. Welcome to the club, Annie. We're proud of you. And thanks for keeping the FFG alive and well.
Posted by Tim at 6:42 AM No comments:

One of the things I love about mountain biking is the way it brings people together in both expected and unexpected ways. I met most of my closest friends because of bikes. I’ve met all sorts of riders from various states and countries because of bikes and this silly blog.

That’s what led Nadhrah Kadir to send me an email a few weeks go when she needed help finding fat-bike rentals for her spring break trip to Alaska. Nadhrah and her friends are from Malaysia and attending universities scattered around the United States. For their vacation, they wanted the full Alaska experience, including a bike ride.

Because it wouldn’t be right to let someone come all this way only to ride the Tony Knowles Coastal Trail, I set up an evening ride that included some singletrack.

They might have gotten a little more than they bargained for, but they were all smiling (and uninjured) at the end, which is all that matters to me when taking newbies out for their first ride. Nadhrah told me it was the best experience she had in Alaska, which still makes me smile.

Fat bikes put grins on faces, regardless of where the faces are from. And how else would four young Malaysian women end up spending an evening with a curmudgeonly mountain biker and his friends in Alaska?


Rover’s Run has a shady reputation that refuses to die. That’s partially because retired biologist Rick Sinnott keeps resuscitating it with cantankerous fits.

Poor Rover’s has taken more than its share of lumps over the years. It got overused, leaving it widened and full of mud holes. Then a bear spent a summer treating it like gang turf, so former mayor Mark Begich shut the trail down. His successor -- making the only one of his decisions I’ve ever agreed with -- reopened it, to the frustration of people like Sinnott.

Now, in a sure sign of spring, Sinnott has dredged up the issue again with an online column lamenting that Rover’s has become “wildly popular” and insisting that “if nothing’s done, more people will be mauled on Rover’s Run.”

He’s right about a couple of things. The trail wasn’t well-planned, and when it was built more than 30 years ago, mountain biking wasn’t foreseen as one of its uses. He’s also right that it runs through the riparian zone next to Campbell Creek, which attracts salmon and bears.

But he’s not so quick to recognize that most of us have spent years and years riding Rover’s Run without ever seeing a bear on it. Bears are out there, sure, but that’s true of most of our local trails. Rover’s had one bad summer in 2008. The trouble-making bear was killed, and there were no further problems. Another bear — which was involved in the summer’s worst mauling — was never found, and was never heard from again.

Even the young woman who was mauled has told me she thinks she probably hit the bear with her bike, causing it to react in a natural, defensive manner. Alaska biologists generally leave such bears alone, because there is no reason to believe they will act aggressively toward other people.

In other words, riding Rover’s Run involves some risk, just like every other trail in bear habitat. And yes, it merits a little extra caution because it’s next to a salmon stream. But over the decades, it has been a safe trail, with the exception of a single summer when one grumpy bear was in a pissy mood and didn’t have the option of writing a column for Alaska Dispatch, which is where other old grouches let off steam with you-damn-kids-get-off-my-lawn rants.

I’ve said for years that the city’s reaction to the summer of 2008 has often been comparable to a driver who spends years on Anchorage streets, then has one bad car accident on an icy road and decides to never drive in winter again. Sometimes a bad thing happens, and you just have to get over it.

Now there’s talk of moving part of Rover’s farther away from the creek. Fine, do it, as long as the new trail is some sweet singletrack. But I doubt the bears would mind a short detour for easy walking on the new trail, so don’t expect much of a change.

In the meantime, I’ll keep doing what most of us have always done: Make noise, carry bear spray and ride Rover’s.

Because this is Alaska. There will always be bears.
Posted by Tim at 3:42 PM No comments:

Civilians usually don't understand why fat-bikers like winter. Or why we love its final stages, when the trails are firm, the sun is back, and the temperatures are rising.

Want to know why I love late February and early March in Alaska? Look at the last four weekends ... 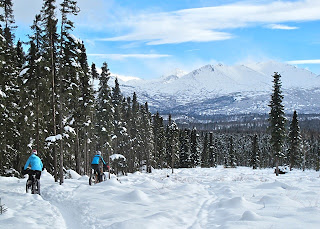 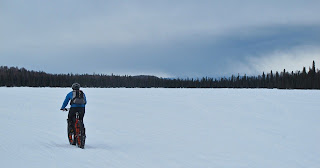 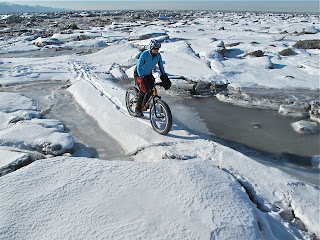 Fat bikes are made to be ridden, and March is made for fat bikes.

I can order a Goodyear Eagle Ultra Grip GW-3 winter tire online for $143. With my driving habits, it would probably last eight to 10 years on a car. 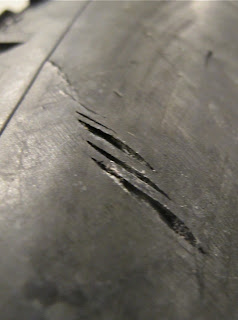 Last week, I paid $150 for a 45NRTH Husker Du tire for my fat bike. If I’m lucky, I’ll ride it for two years before the sidewalls start falling apart, as they just did on my Surly Larry.


I accept that we torture fat tires. They have huge sidewalls, and we run them in extreme temperatures and at low pressures. So, even though they generally live a life free of jagged rocks, they’re big dogs. And big dogs die sooner than little dogs.


But I really hope that this niche market keeps growing, and attracts another player to the fat-tire manufacturing business. We need better tires, and we certainly need lower prices to help us junkies feed our nasty habits. Competition is always good for consumers, and fat-bikers consume a lot of tires.


One of the first rules of parenting is that you should always teach your kid to never sign the ransom note. Especially when he's playin' hardball with the Baby Jesus. That's one of the lessons in the bicycle short posted above.

Or maybe the main message is that a little boy should never trust a priest. But I think we all learned that one years ago.

In any case, If You Want Your Mother Back is one of 20 finalists for the VELOBerlin Film Award. and Josefine from Berlin has been asking me to tell you about the competition. After watching a few of the shorts, I decided I should listen to her. The films are fun, and unlike those snooty Academy Awards they do in La-La Land, you don't have to be a Hollywood insider to vote for the winner.

Just pour a drink, click over to the VELOBerlin site, spend your evening watching and rating all the flicks.

Then sober up and go ride your bike.

Rollin’ fat ones in Homer

Fat is where it’s at in Homer, especially during the Big Fat Bike Festival. And we can now call it the “annual” BFBF, because the Homer Cycling Club has pulled off two events in a row. Both were a hoot.

Beaches, bonfires and fat-bikers is a pretty tough combination to beat. Especially when you throw an impromptu helicopter beer drop into the middle of the ride. (Even though my group missed it because we had already left the fire to roll back toward Homer.)

I also got a taste of what it feels like to win a free bike frame. Unfortunately, I got the taste because I had custody of raffle tickets for the absentee winner during Saturday night’s burger ‘n’ beer dinner. Oh, well. At least it felt like mine for a second.

Thanks to all the Homer riders who worked hard to put together another fun event, and for listening to everyone’s input from last year to make BFBF 2013 as successful as possible. The post-ride bike-wash station at Cycle Logical was a huge help for those of us who had to haul piles of fatties back to Anchorage.