Bluto was my role model*

* What's your excuse?
Y'all oughta be ashamed of yerselves.

Here I was, thinkin' each person who reads my blog must be an individual of intelligence and good taste, and you let me down. I check the stats occasionally; I know 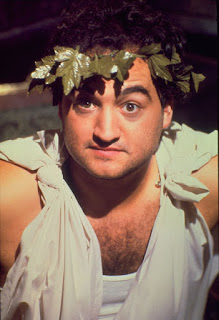 what kind of places you people are hanging out in when you waste your employers' time on this shit. State and federal government agencies, oil companies, software firms, engineering outfits, university computer networks—they all show up in my barely understandable stats.

I mean, seriously people. I figured most of you were smarter than me. It's not like that's hard to achieve!

So I write a post about doing the Octoginta ride next weekend and admit I have no earthly idea what the name of that event means, and who is the only person who tells me?

My sister-in-law in Phoenix, who happened to be reading the blog only because she was bored out of her skull and couldn't find anything better to do! She's not even one of us! She's a civilian—one of those people who owns one cheap bike and is happy that way!

And she had to be the one to tell me that "Octoginta" is Latin for 80. As in 80 miles. Which—by some freakish coincidence—just happens to be the length of the event.

It's like calling a 100-mile ride a "century," but gettin' all hoity-toity to do it.

Now, personally, I'm not embarrassed by not knowing such a thing. After all, I majored in journalism. Journalism school is like an academic refugee camp for people who drink too much and can't do math.

But some of you people understand gear ratios and how carbon fiber actually works. You took all the hard classes. I expected more from you, people, I really did.

My excuse is that I was an english major. English is like an academic refugee camp for people who drink too much and can't decide on a real major!

Hey I need something to keep me from falling assleep during a lecture..........Guilty As Well University Computer Networks!

I also didnt know Octoginta, I dont work at a oil company or go to school.
Im a bike rider and racer on my own computer on my own time.
Weird.

I had a case of the Octoginta once. And yes, this is being posted on my employers computer, employers internet, and employers time. I will not let the man keep me down, or for screwing off once in a while.